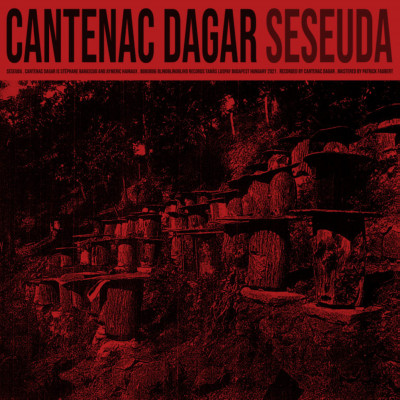 February, month of despair. The darkest days of winter done and yet it’s the bleakest month isn’t it? I think that’s why it’s shorter than the others, only gaining an extra day every so often when we think we can stand it. The Groundhog peeks out of his hole to see how much more of this we might endure. Surprisingly perhaps, these subtle and uplifting noise jams from French duo Cantenac Dagar might help. Noise isn’t usually the first choice when looking for music to bring cheer but they cook up a rhythmic, ritual, couple of grooves here that bring a trance like affirmation. It’s abrasive and textured and blown out, of course, but also kind of joyous.

Fans of Sly & The Family Drone should lend an ear, there’s some common ground here I feel. ‘SAIQUE’ kicks directly into a head nodding and triumphant stomp. The unswerving relentlessness of the beat pushing your shoulders back, encouraging you to lift your head, take a deep breath and look up into the sky. The roar of a crowd comes in, tape loops from what I guess is a football match, widening the sense of space in the track. The beat ebbs away to a swirling, churning central section. The energy starts to drain and then, almost casually, the rhythm returns, as does the crowd and it becomes a steady rolling storm of static noise.

On paper the, admittedly colourful, details of this release did not quite suggest such impressively fluid sonic voodoo. They call this “a ritual for the invention of radical sensitivity” and it is apparently conjured using banjo, human beat-box, bells and a cassette player. This description and unpromising kit list combined with the fact blindblindblind is the project of a Hungarian zen monk led one of our more cynical writers to suspect someone might be taking the piss.

I’m not proud. Banjo and human beat-box though. It brings unwelcome echoes of suppressed festival memories – stuck in a marquee with terrible folk-punk bands while the rain hammers down and your legs become unhelpful with cider. Stéphane Barascud plays banjo with a bow through a bucket of filth and distortion so that it sounds like the ragged country cousin of John Cale’s viola, wailing and screeching, sawing and howling. Meanwhile Aymeric Hainaux doesn’t sound like any beat-boxer you ever heard, more like a steam powered drum machine rescued from a sunken ship. Rusted and clogged and thick. Really, as ever with this kind of thing, it’s the loops and processing and distortion as much as anything else.

The second track ‘SELEAU’ is lighter and brighter. Rolling along on a looped bass line, it’s solitary and introspective, lonesome even. Its wandering progress is subject to passing bursts of noise that layer up a slow building intensity. The gathering buzz and drone is pleasingly offset by long harmonica notes. Now, anyone who had a toy mouth organ as a kid knows you can get some formidable discord out of them things without even really trying but here it floats sweet, airy, tones above the grind. Tuneful without ever actually becoming a tune. As the thickening loops become a fierce roar the almost obscured beat is finally pushed under by a ripple of canned applause. There’s a brief announcement, like a talk show host thanking a musical guest and cutting to commercial. Then it rides out on lovely waves of warm distortion.

It seems Cantenac Dagar have been at this for the best part of a decade now and SESEUDA offers plenty of evidence they have mastered their approach to things. Recording everything live they still achieve a great sense of space in their sound and separation between the elements. Raw sounding but directed with clear intention, the two long tracks here offer contrasting and unexpectedly uplifting sounds to get lost in. I bet they’re an impressive live experience, a conviction it sadly looks unlikely I’ll get to test for a fair old stretch of time, if ever. How many more weeks of this winter?