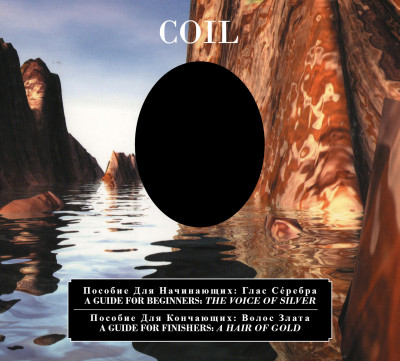 Let’s get the woolly mammoth in the room out of the way straight off the bat. How do you condense a sizeable back catalogue, particularly one as varied and prolific as Coil’s, into a mere double album? Can it be distilled to such a meagre offering and still retain a valid representation of the breadth of their work? After all, the volume released following the death of Peter ‘Sleazy’ Christopherson’s death alone could comfortably furnish the entire combined careers of multiple industrious creatives.

The answer is, unsurprisingly, fuzzy. You can claw through the hours, if not days or months, of music and try to corral the recordings into tangentially-linked clumps before slimming said piles down to the ‘best’ representation of that particularly limb of their output. Of course, whatever constitutes ‘best’ is entirely subjective and will inevitably disappoint someone or other. You could also select the tracks most likely to hook in someone less familiar with the work of the artists. This will, of course, ruffle the feathers of those who cling on to a rare, flexi-disc-only B-side as the apex of the band’s endeavours. ‘Best of’ compilations are rarely for those already intimately familiar with a group but, as completists like to complete, they’ll surely end up scoring and skewering the release anyway. So, with disappointment reclining luxuriously at the heart of this task, the approach on The Golden Hare With A Voice Of Silver (A Guide For Beginners – The Voice Of Silver / A Guide For Finishers – A Hair Of Gold) was “a little of column A, and a smattering of column B”. Split the compilation into something that best represents Coil’s oeuvre for both greenhorns and wizened elders alike.

First up is the noob-friendly section. An oneiric drift through a liminal mindset full of floating and phased synths, distant drums, and soothing vocals intoning the careful steps of a bedtime story. “The dreamer is still dreaming”. From songs about South American mushrooms (‘Amethyst Deceivers’), murdered Italian filmmakers, and MDMA experimentation to foreshadowed death plunges and odes to Pan, it’s carefully curated to ensure that the initial journey into Coil’s world is as gentle a one as possible. As the duo explain on ‘Are You Shivering’, “This is moon music in the light of the moon”.

Coil are alchemists. Painting pictures from gold and silver that they’ve sourced from existence. A literary twang to every utterance. On ‘Who’ll Fall’ we hear the voice of one of Christopherson & John Balance’s friends foreshadow Balance’s own deadly plunge 18 years later. Then, further down the track-listing, we hear the uplifting religious murmurs of ‘Batwings’. A track that purrs and twitters before broaching fervent, spiritual, exultation.

Coil sprawled across experimental genres as diverse as industrial, dark ambient, and neo-folk. Genres that have been fertile grounds for the so-dubbed New Weird Britain. Not only that but they have also served as shadowy haunts for far-right ideologies. These are trappings that they didn’t exactly steer away from. Nor did they embrace. The ambiguity of both Christopherson & Balance’s relationship with these ideas, as well as the occult, only added to the mysterious appeal of the band. And it was this delve into darkness that really comes to the fore on the second half of The Golden Hare…

It’s often said that the second half is often darker and that’s certainly true here. As we descend into the frazzled late hours, skittering eyes and shifty attentions dominate. Mangled voices flirt with mania. Whether it’s in the strident rhythms of ‘First Dark Ride’ or the proto-dubstep of ‘Further Back And Faster, it is the stuff of ill-lit, slowly rotating mobiles that form the centre piece of cold sweat nightmares. All eerie and weird. ‘First Dark Ride’, in particular, explodes into a night of ecstasy rushes: all strobing lasers and partially-glimpsed faces. Coil could take you to places, although they weren’t always locations that you wished to visit. The tinkling bleeps of a clockwork ballerina merging with clubbed out stirrings that then dissolve into dubby stomps. All sliced through with a sense of distrust. This was a soundtrack to nihilism. A hedonism born out of self obliteration. It’s carnivalesque. An embodying of the unsettled British mind. A state of mind which, uncultivated, can seek solace in exploitation. A deep ingrown sense of self that dares not look in the mirror. Fed down paths of expression, however, helps to allow recognition of others.

Coil tapped into dark synaptic threads via mangled kids toys, bipolar speed switches and a love for the unsettling. Taken individually, the sounds of chirpy marimbas, thudding drums, and trance synths seem euphoric yet, combined together, they become, well, creepy. It’s like a demented form of Acid House. The music they made was dense with intricate production that encouraged deeper and closer listening in order to pick out the nuances of panned sounds, reversed notes and dynamics that pitch and veer, shifting the spotlight from one thread to the next. It asks questions of its audience in the same manner as a therapist, knowing that we hold the answers within us. This can only help to coax out the truths that we are seeking.

So there we have it, a reissue of two turn-of-the-century compilations that deal separately with Coil’s ambient & industrial personas. A core duo with a stellar guest list that I daren’t even try to broach here. Musical tendrils that fingered all corners of their interests. Music like Coil’s ought to act as a blueprint for experimental expression. Dive into libraries. Read, my lord, read. Take your time. Hurry. Build your own instruments. Seek inspiration from all around you. Start, collaborate, and listen.