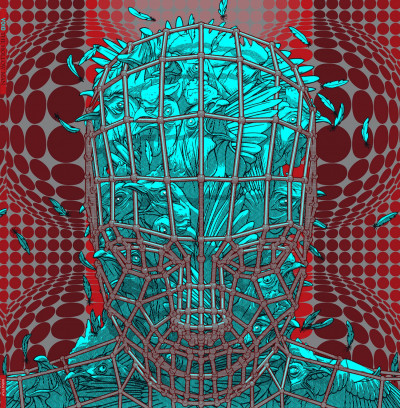 The Hollow Man by VOID

The Hollow Man, the third album by London’s most ambitious avant garde extreme metallers VOID, packs a lot into its 40-minute odyssey. The Hollow Man draws its primary conceptual inspiration, mercifully not from the rather blood-less Marillion track of the same name, but from T.S. Eliot’s classic of Modernist poetry, ‘The Hollow Men’ – in addition to Coppola’s related psychedelic Vietnam war epic Apocalypse Now, the religious epiphany/madness of Philip K. Dick, the weirdness of Willy Wonka, the culture of ancient Babylon, apocalypses in their various shades, and no doubt a host of other batshittery that I’ve missed. This heady mix is gloriously strung together into a deeply impressive and coherent concept album of the very best kind, told in VOID’s signature language of brutal and unpredictable riffs. Here, that style is expanded by their most eclectic range of genres to date, the fullest, richest production of their oeuvre, and all wrapped up in the enigmatic and eye-catching artwork of Metastazis. Pulling off their grandiose ambition with panache, this is VOID’s best work yet, and one that demands obsessive replaying.

As with other, comparable heroes of the UK avant garde extremes like Voices, Akercocke, A Forest of Stars, and <code>, VOID have always been here to tell metal that “conservative thinking [has] made a fool of us all”. Founded by the double-barrel of Matt Jarman (Zyklon) and Matt McNerny (Hexvessel, Grave Pleasures), VOID’s debut album Posthuman fused techno-industrial beats with volatile riffage, while a sophomore self-titled album ditched the pounding beats for a new kind of anthemic brutality, with complexity, melody, and a raw, gonzo quality. The 2017 EP The Unsearchable Riches of Void ran with this madness, adding samples of Trump with Broadway musicals, and thrilling shifts in tone and mood, to make a truly unstable and infectious beast.

If VOID incorporated spoken word sections previously, Jarman’s performance as narrator is even more prominent and memorable on The Hollow Man. The first lines of the intro, in which ‘A Helicopter scorches a black silhouette across a rust-coloured sky’, immediately signal Coppola’s skewed montage of Colonel Willard’s nihilistic self-destruction, but relocated to a dystopian city, and the constant process of folding in cultural allusions begins. Tense, heart-swelling strings adopt the rhythm of those blades as operatic voices harmonise lines from The Doors’ classic of apocalyptic folk, ‘The End’, and our narrator – like Kurtz and Dennis Hopper’s photojournalist character – intones Eliot’s lines, even more dead-sounding than the poet’s own monotone readings. For thine is the kingdom…For thine is the kingdom. Setting lines from modern(ist) literature’s great fractured epic poem to metal may seem bold – arrogant even – but, with its multitude of stylistic shifts and voices, Eliot’s work is perfect for the schizophrenic complexity of VOID. As a band who’ve utilized a range of singers over their near twenty-year history, The Hollow Man is VOID’s most polyphonic release to date, featuring vocals from Jarman and established frontman Levi, in addition to newcomer Laura – and a broad plethora of rasping shrieks and guttural grunts accompany our zombie narrator, somehow coherent in their multiplicity. Here, Eliot’s collective in the ‘The Hollow Men’ naturally becomes the individual, unnamed protagonist/narrator of The Hollow Man, whose soul we follow on its continual transmigration across time, space, and genre…

…on ‘II: A Mental Break – Pink Beam of Light’, we segue disconcertingly into smooth, fretless bass-led funk-jazz, before our protagonist’s “head hits the street-side curb” and the riffs kick-in sharply again under a babble of crying voices. The Metastazis artwork depicts Eliot’s “headpiece filled with straw” as an oppressive psychedelic nightmare, one which takes a very bad trip indeed as VOID follow the trippy Tunnel Scene from Charlie and the Chocolate Factory, down into the bowels of the Wonka Factory, imbibing a disorientating melange of melodic tech-metal, D&B, melancholy strings and piano, and not showing any signs that they are slowing. (“Never get off the boat. Absolutely goddamn right.”) It’s a track that will haunt your brain for days, guaranteed.

Fourth track ‘III Loss & Regret – A Featureless Iron Mask’ is VOID at their most cinematic – “flashback to a child/ standing beneath a tenebrous April sky” – running the gamut of emotion in an almost neo-classical composition, sharing a spiritual kinship with Emperor at their most baroque, or Igorrr at their most coherent. Following the largely narrative-driven ‘Transition’, we’re back to the paranoiac realities of Phil Dick, with Laura taking the lead in a snarling witch-voice, over tightly abrupt riffage and ray-gun blips and bleeps. It’s culmination – bringing in all voices, strings, furious drums, snippets of guitar lead, in a deranged kaleidoscopic whirl – certainly make it one to watch out for live, if (when, when) such a thing is possible again; as is the case with ‘VI Resurrection – Battery’, a more straightforwardly band-oriented track, in which our protagonist reappears in the body of a battery hen (“Where are my hands?”), like those depicted in the stuffed headpiece of the cover art. And it’s about as traumatic as it sounds, vegan or not.

In the final resurrection/transmigration of The Hollow Man – part Colonel Willard, part Phil Dick, part Charlie Bucket, part female chicken – our protagonist/narrator pops up in ‘Babylonian Times’, a palette-cleansing track of traditional Arabic folk played (I think) on an oude, in which a father preys for violent revenge upon the masters who abused his daughter (maybe the girl beneath the April sky?), complete with background market sounds that reward the dedicated headphone listener.

The Hollow Man himself is destined to meet his own Kurtz at the end of the river – having achieved revenge and revelatory sci-fi madness, and escaped a lifetime of egg-producing slavery and a free ride on the shiny elevator of a creepy Wonkaneur – in a good old fashioned apocalypse. Yet there is (a Pink Beam of) Light at the end of (Wonka’s) tunnel.  As children’s voices resume Eliot’s lines, singing “here we go ‘round the prickly pear’, and it’s time for the finale ‘VIII The End – This is the Way The World Ends’, it’s impossible not to think of the various endings presented by our current COVID plague, even if the album was recorded in months prior. In a world where many people have headpieces filled with straw, The Hollow Man – a genuinely original work of extreme music – brings a clear message: that the world doesn’t have to end:

“With hope and despair coming together/
To the point of becoming the same/
For they are deranged, indistinguishable twins
Bearing the mark of the ultimate things.”