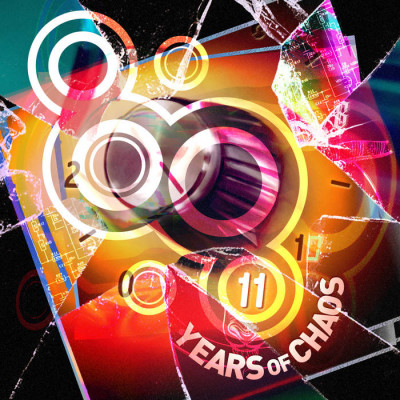 First off, I’d like to start by saying happy anniversary to Kunal Singhal, the founder and chief of the Chaos Theory family. The promotion has been a paragon of the left-field music scene since it’s inception and that is no surprise when you consider the ubiquity and work ethic of its dynamic front person; Kunal is omnipresent at gigs, record shops, music venues. He goes where the music is and slaps a sticker on it. The guy is a true sage, if you wanna find a cool new band or a venue to play, he’s been questing for over a decade soaking up that knowledge like a sponge.

Writing for Echoes And Dust and being an avid music nerd, it’s not often that I can find cool new bands to listen to, Kunal finds the best new sounds from all over the globe. He’s ran gigs with an ever-evolving yet, consistently lovely and hard-working team and though some faces have come and gone, I’d like to shout out particularly to long-term team member, Alan Pride, another wonderful champion of underground music.

It really takes a village, and community coming together is something Chaos Theory has always been about. Raising bands, venues and artists up wherever possible and frequently being involved in charitable endeavours…and I don’t just mean Kunal’s willingness to DJ for seemingly any event. Promoters are an essential part of the musical ecosystem without promoters, we wouldn’t have the incredible live music scene we were accustomed to prior to life in lockdown,. They funnel the bands directly to their appropriate audience and help them get the word out. Not to mention they pay bands so that they can survive working with venues to keep music itself as the beautiful release that we know and love.

Which brings me to this release, if you buy this album you will help to keep Chaos Theory alive and you will also help to save The Black Heart from closure (due to proceeds from the album going to their fundraiser) and you will be supporting underground bands. Every band you ever loved got to years by first having a promoter that backed them and a venue that hosted them lifting them up to the spotlight. If you can give back, now’s the time.

Having been to one of Chaos Theory’s annual birthday celebration festivals (you can see the review here: https://echoesanddust.com/2018/02/long-live-chaos-theory-8-years-of-chaos/) I can tell you from experience that we’ve been robbed of one of the greatest annual music events of the year. I hope that if you’re reading this you’re feel sore about that too,  but at least we have the next best thing with this compilation album. It features a mix of new/unreleased tracks as well as notable offerings from a wide array of excellent bands that have previously performed at the promotion’s gigs.

The following is a rundown of some of my favourite picks from the compilation, in order that made sense to me at the time. A Sweet Niche’s ‘La Cuisine (Live Big Band Version)’ instantly won me over. Upon first listening it reminded me of the post-jazz stylings of The Comet is Coming with its crooning brass section, but over the course of the track it became an amazing hybrid that I would describe as ArcTanGent Whiplash. Really fucking cool track, definitely need to listen to more of this band.

Another excellent post-jazz track on the compilation is ‘Fire From Frozen Cloud’ by Five The Heirophant. The saxophonist is fucking incredible, the atmosphere and hooks this instrument creates in the top-line melody are second to none. I love the blend of the brass and the post-metal arrangement beneath. Definitely my top discovery of this release, so annoying that Kunal suggested them to me before and I never got round to them. Stupid me. Absolutely awesome. Can’t hype it enough. I can easily see these two artist’s blowing the roof off the house at one of Chaos Theory’s Jazz Market events. But, talking about The Jazz Market, makes me think about another memorable collection of themed nights from the promotion: The Facemelter.

One of my favourite face-melters on the compilation was ‘Locking Stumps’ by Boss Keloid, it seems to be influenced by proto-grunge bands like Jesus Lizard and The Melvins, but there’s that hint of classic rock and heavy metal/thrash as well as hardcore. A really nice blend. I do think it could sound a little less wet and a bit more sharp though, but that’s just because I like music that feels like someone scalping me and jamming noise in my brain. Really fucking cool none-the-less, great riffage, hard drumming and well-executed vocal harmonies. The Casual Nun offering ‘A Light Plague (Radio Edit)’ to me is a really different sound for the band mainly cause of the clarity of Vasili Shako’s usually effects-bludgeoned vocals. It sounds like if Metallica were good. Or had a great singer, instead of a shit singer and a hit and miss band. The song is from their album Resort for Dead Desires which I reviewed for Echoes and Dust, but didn’t actually spotlight the track at the time.

Another scorching track that I really enjoyed was Kylver’s ‘Hy-Brasil’. I love the rhythm it has a powerfully enrapturing charge to it, the keys are really cool as well. The track feels somewhere in between horror and metal and I love both of those things. The riffs are on point too, definitely a band deserving of Chaos Theory’s Facemelter banner. The award for best track title definitely goes to the mighty Årabrot with their snarling, post-metal sludge jingle ’The World Must Be Destroyed’. A catchy and memorable offering. Although, it’s not all doom and gloom, ‘Absurdly Ineffective Barricade’ is the amusingly titled and relentlessly frenetic entry by Yowie to the compilation. I love how intense the track is everyone seems to be playing as much as they possibly can and as fast as they can. It has a bit of an Oneida vibe and the song obviously seems to convey a more light-hearted approach to the heavy.

Speaking of hearts though, with this collection donating proceeds to The Black Heart, I’d like to talk about a band I saw bring the house down at another great London venue The Lexington and that band is Mammoth Weed Wizard Bastard. I had the honour of getting paid as part of the bar staff to watch this Chaos Theory gig and they really blew my mind. ‘Yn Ol I Annwn’ is a great example of their work. Sadly, as a result of the pandemic, The Lexington like The Black Heart and The Windmill is relying on crowd funding to stay alive, so,if you can afford to please support these venues and keep the ecosystem of bands, promoters and venues alive. Take one piece of the puzzle out and they all topple down.

Some more acts that give me nostalgia for Chaos Theory gigs on this release are Flies Are Spies From Hell and The Fierce and The Dead hearing their tracks here is like a time machine to good times. Same goes for dark ambient wizard Metalogue who’s post-techno take on the genre makes for spell-binding results. Prisa Mata also stand out as another classic Chaos Theory band to me and their track ‘Crooked Tress’ is such a head-banger that I can almost feel Kunal’s long, curly hair thrashing against me in the pit whilst listening to it.

Finally, I’d like to look at some of the weird and wonderful offerings that I’ve discovered on this 11 Years Of Chaos compilation. Whether it be the industrial ooze of Riotmiloo’s ‘Vile Butterfly (Chaos Theory Mix)’ or the dark synthwave ambience of Thomas Ragsdale’s ‘Blackwood’ there’s a channel of dark, left-field and at times gothic music that passes through Chaos Theory’s history, almost like they’re crawling into the night after a long night at Electrowerks. There’s two tracks that are so bleakly goth that they both reminded me of the despair-driven excellence of Dead Can Dance and those are Black Orchids’ ’Lament’, which sounds to me like what I imagine it would sound like if Dead Can Dance made doom and I think that should mean Echoes And Dust founder Dan Salter should love them? Definitely one darkwave fans will enjoy.

And secondly, Drekka’s ‘Call To Prayer’, another amazing discovery for me in the more ambient bracket of the compilation. The ominous vocals and deep production create a powerfully alluring atmosphere, can’t wait to delve further into these guys. The last weird and wonderful track that I want to cover is ‘Cold’ by Scald a really narcotic, mindfuck of a track. The percussion sounds like a server fire, the ambience is great, but the fire burns brightest. Really cool piece of music.

Overall, there’s unsurprisingly a great number of really excellent songs on this release and I’m really happy to find some new bands to check out. 11 Years Of Chaos is a great example of Chaos Theory’s impeccable eye for talent across a diverse cornucopia of bands, solo artists and producers, please help them to support themselves and The Black Heart by purchasing this release: without venues, promoters and bands, there is no music, it’s as simple and symbiotic as that.