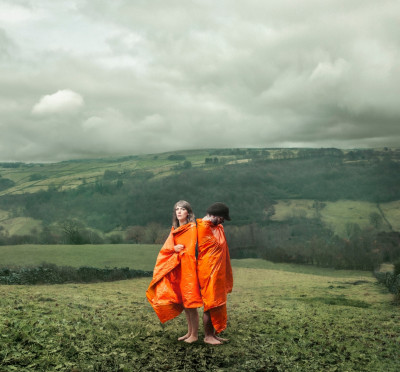 You can’t really go wrong if you draw from the likes of St Etienne, Broadcast, Stereolab, and ABBA, and chuck in a dash of Hammer Horror for good measure. Cecilia Fage, Matt Berry’s chanteuse of choice, and I Monster/Regal Worm’s Jarrod Gosling return as the macabre psychedelic duo Cobalt Chapel to take another bite of the retro pop poisoned apple. I really rated their self titled debut and raved about it to anyone who would listen. Which didn’t turn out to be that many people actually. Still, those of use who swallowed the magic potion will no doubt be back for this sophomore effort.

Orange Synthetic is an exploration of the epic county Cobalt Chapel call home: Yorkshire. Rooted firmly in place, it is inspired by the humanity, anecdotes and folklore of the region, the creatures and legends of the dramatic landscape surrounding them. It’s kitsch, but it’s great fun, and God’s Own County clearly proves to be fertile soil in which each of the tracks here are rooted.

Gosling has a large collection of vintage keyboards and synths, many of which are brought to bear on this recording, the overall impression of the way these play out is one of warmth rather than imperial, clinical, icy-ness. Fage also has brilliant vocal skills, her multilayered voices create a wonderful, haunting miasma, evoking the phantoms of a forgotten past.

Pop was always this way once you feel, and clearly there remains a place for Cobalt Chapel’s classic British psychedelia – not just something mind-bending, but an art linked to our national eccentricities, a music steeped in our complex and contrary history, a form of creativity tied to nature, our sense of poetry and the picturesque. Royston Vasey set to music? Yes, on the surface, but this recording is so much more rewarding than that. Think more A Field In England, or The Draughtsman’s Contract, Sightseers, the BBC M R James ghost stories, where a common, unsettling, atmosphere drenched both contemporary and historic tales of an uncanny country. Each of the songs here – like those films – can be simply enjoyed for what they are, or if you let them, they can haunt you long after the final notes have played out. This is the genius of Cobalt Chapel: they never let you go, at least not comfortably.

But there’s a good deal of love here too. Not just for Yorkshire I would dare to suggest, but the whole country. A country that brought us such musical diversity as The Beatles through to Delia Derbyshire. There’s a strong sense of lament in this record for that cultural diversity, our ability to absorb the outlandish and unusual and make it our own – be that in art, music, culture, or indeed, people.

Throughout the album I also fancied that I found an almost continuous possibility to change, to give oneself over to the unknown, over to perhaps what scares us. In many ways these isles we call home are seen now as very narrow minded in both our ambition and our culture; synthetic, something less than we could be. Cobalt Chapel explode that way of thinking, the Brexit mindset – we just need to open ourselves to possibility and throw our fears to The Devil (who as many a Yorkshireman will tell you, is a Lancastrian. Before you write in – I’m joking).