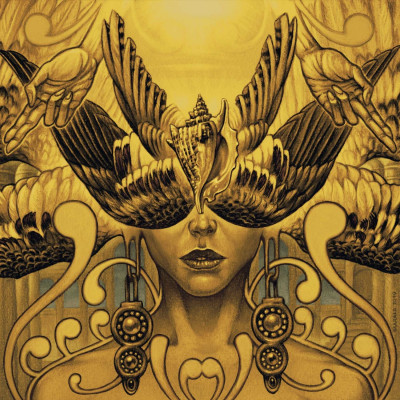 Sometimes a band’s release causes a bit of a buzz around these parts and DVNE’s 2021 release Etemen Ænka is one of these. Their 2017 release, Asheran, ended up at number 3 on the Echoes and Dust album of the year list and our insiders were quietly excited at the new release. DVNE (for the uninitiated, it’s DUNE, as in the Frank Herbert novel) are a hard band to categorise. A bit prog in places, a bit post-metal in places, but the Edinburgh-based five-piece create heavy music that is dense and noisy in places and wonderfully serene in others. The listener is taken on a journey and rewarded new aspects on further listens.

When you first listen to the opening track, ‘Enûma Eliš’ is a bit like being hit by a rogue wave, it just comes out of nowhere. Half a minute of silence to build the tension before being hit by a maelstrom of noise. There’s everything, post-metal distorted guitars, riffs, a wonderful bassline and some energetic drums and just as the wave washed over us we are back to some calm. ‘Towers’ has a heavy and muscular feel, the growled vocals are strong and deep. The guitars this time working in tandem to create a thick and heavy sound, After a couple of minutes one of the guitars launches into a complex but melodic riff changing the texture of the track, leaving some space for the bass to punch through. Fans of their previous work will be aware that the band has the ability to let one musician take lead in the track, and in this case, it is the bass that takes charge. It adds a stunning change to the dynamics of the music.

The third track, ‘The Court of the Matriarch’, opens with another energetic guitar hook weaved around a solid bass line and after a quiet interlude, the band opens the taps and lets go. DVNE do this wonderfully well, you get drawn into the music and carried along for the ride. The clean vocals give the track a positive, almost anthemic, positive feel which is balanced by the growled vocals which play wonderfully with each other. The one noticeable difference on this album is the use of synths and keys, they add some warmth and atmosphere to the music, it’s subtle but effective. Sandwiched between two interval tracks, ‘Omega Severer’ is a monstrous track with a huge amount going on. It varies from soft clean, vocals to growled and then some distant female vocals. The band easily ebb and flow. The guitars really shine on this track, around mid-way through the female vocals are let loose over a lead guitar and the effect is nothing short of awesome. There is such a large amount going on in the nine minutes it’s hard to process. On further listens this tracks really is a standout on the album.

‘Sì-XIV’ starts in muscular, confident fashion before falling back a little and swapping growled vocals for clean, triumphant sounding vocals. The track, carried by the rhythm section and the guitars are allowed really express themselves. About two-thirds the way through the band really hits heavy, dual vocals and guitars really grab the listener by the throat. It’s followed by another epic-length track, ‘Mleccha’. Usually, I try to understand what the band is feeling and trying to express but while delving into this album I am just enjoying it for what it is. On ‘Mleccha’ they cram a huge amount into 8 minutes, quiet parts right up to a full bore onslaught, it’s done with skill and balance though. It never feels too much. Both the musicianship and production are of top quality.

Just as the listener is getting used to all the noise and excitement the band takes a complete 180-degree turn and ‘Ahspodel’ is completely different. Soft female vocals and clean guitar give the impression of a completely different band and this track fades into the final track ‘Satuya’, again starting fairly peaceful, no vocals but just a lead guitar taking the forefront. But one thing DVNE do so well it keep the listener guessing, just as you get used to one part you’re grabbed and thrown into a different direction. To stick with an aquatic metaphor it’s a bit like white water rafting without a map, the next turn could be a patch of calm water or it could be a waterfall, who knows. ‘Satuya’ is an epic 11-minute track to end with, it has a black metal feel to parts of it. Again the bass is sharp and precise and gives a basis for the growled vocals and lead riffs. The track and the album finishes exactly where the album started with some peaceful atmospherics.

In a time where a lot of people’s creativity has been stunted and the world is infused with a general feeling of malaise, DVNE evidently get the memo, on Etemen Ænka they have created a stunning album. It’s accessible on the first listen but gets better the more time that is invested in it. Credit should also go to the production (Graeme Young from Chamber Studios in Edinburgh) as this is dynamic and complex music and the production is spot on. If there is any justice in the world this album should get DVNE a much wider fan-base. Ok, so 9-minute epic songs aren’t exactly radio-friendly, but this is exciting, emotive and extremely enjoyable. If you have an hour spare, give this a listen and you will be handsomely rewarded.