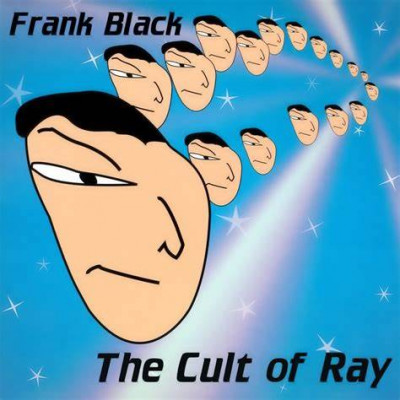 The Cult of Ray/Oddballs/Christmass by Frank Black

It was always going to be a gargantuan effort for Frank Black to match the fiery original weirdness and quality of the seminal Pixies. Let’s face it, the Pixies made some of the finest albums of the late 80s early 90s and in their years of absence after they disbanded, their stock and reputation only grew even wider and stronger. In the period that followed, Frank Black went solo and prolific, releasing a string of albums all of which will be re-issued this year. The process begins with the re-issues for the first time on vinyl of The Cult of Ray, Christmass, and Oddballs via Demon Records.

Out of these three, The Cult of Ray is the studio album, and with its rock radio friendly production is arguably one of his most assessable solo ventures. Now with greater hindsight, and not automatically comparing it with the same intensity to his legendary band as on its original release in 2001, benefits Frank here, as The Cult of Ray is a largely enjoyable consistent thirteen songs romp and stands up rather well.

All thirteen songs were written and produced by Frank himself, which sees Frank and the band whip by with good energy boosted by many fine tunage – ‘Punk Rock City’, ‘You Ain’t me’, the frenetic rush of ‘Dance War’, the sunshine jangle of the title track, the chuggy rocker ‘Men In Black’, and the sincere mournful sounding ‘I Don’t Want To Hurt You (Every Single Time)’ are the standouts. It’s an album worth going back to or exploring for a first time.

Oddballs is a compilation of B sides, Bonus tracks, and the odd unreleased track (‘Jumping Beans’) that were recorded between 1994 and 1997. As normally the case with these types of albums they can be a mixed bag of good along with the throwaway. But like those early Pixies 12 inches it is where you can find some hidden and forgotten gems outside of their albums. There are some good finds here sandwiched in among the disposable, with the rougher and edgier ‘Pray A Little Faster’, ‘Oddball’, ‘Can I Get A Witness’, and the multi-tempo changing ‘At The End Of The World’ being the highlights.

Chistmass is a double live album of a U.S acoustic tour from 2006. A mix of solo material and Pixies numbers with the occasional song padded out with additional instrumentation like violin, cello, and strings on one of its highlights ‘She’s My Way’, and accordion on ‘Nadine.’ And the class of the classic Pixies songs like ‘Where Is My Mind’ and ‘Cactus’ lose nothing of their enjoyment with just Frank strapped with an acoustic guitar. As somebody who isn’t much of a fan of the live album I enjoyed this more than I anticipated, but it’s still best listened to by breaking it down to one side at a time.

Frank Black might not have achieved the same consistent heights of someone like Bob Mould in his solo life after Husker Du, but there are plenty of gold nuggets to be found across this period. As for the pick of these three albums, then that award goes to The Cult of Ray.