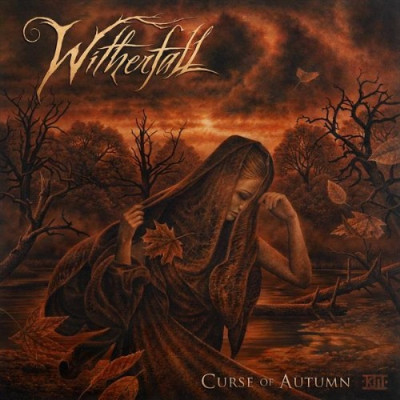 Curse of Autumn by Witherfall

Witherfall may be a relatively unknown name within the heavy metal community, but they look set to take the world by storm. With the implosion of Iced Earth freeing up a lot more of guitarist Jake Dreyer’s time and with the addition of human drum machine Marco Minnemann as a full blown member, the LA based quartet have dusted off any notion that they are merely a side project. Indeed, with an album as good as Curse of Autumn they look poised to make a move for the upper echelons of melodic metal.

With Sanctuary vocalist Joseph Michael and bassist Anthony Crawford rounding out the line-up, Witherfall’s sound will come as no surprise, but they are very much more than the sum of their parts. Armed with shades of Iced Earth’s blistering approach to power metal (helped no doubt by Iced Earth supremo Jon Schaffer, who took up production duties before his arrest), as well as the overblown theatricality of Sanctuary, Witherfall have nonetheless spent two albums crafting their own style. While debut Nocturnes and Requiems was a somewhat naïve affair, 2018’s A Prelude to Sorrow saw the band truly come into their own with an emotional tribute to former drummer Adam Sagan. Curse of Autumn takes that development a step further, while also feeling far removed from its predecessors – this is an angry album, far faster and heavier than previous records, but with no less of an ear for the melodic. There is a gothic eccentricity about the band in full flow, yet at the same time the layered instruments build up a profound sense of anxiety.

The band set their stall early with ‘The Last Scar’, a fast aggressive thrasher to kick off the album. From there, the band segue into lead single ‘As I Lie Awake’, a catchy blast of heavy metal. Both are excellent tracks, but in many ways are relatively straightforward. It isn’t until the third track proper, ‘Another Face’, that things truly get off the rails as what starts as a fairly predictable ballad soon gives way into something different. Here, full blown histrionics and a semi-accapella refrain from Joseph Micheal round out a track that never settles for predictable. It shows a band unafraid to try something different, and it doesn’t stop there as Witherfall launch into ‘The Tempest’, an eight-minute progressive tour-de-force, whose blistering howls truly live up to its name.

From there, the winds begin to calm again. The title track is a short acoustic interlude, while ‘The Unyielding Grip of Each Passing Day’ is a solid showcase of the musicianship on display in the band – both fine, but feeling somewhat filler. ‘The Other Side of Fear’ is a late album highlight – a panic attack over four minutes, this is probably the heaviest track on the album and is a real display of new boy Minnemann’s talents. It sits in stark contrast to ‘The River’, an emotional tribute to Joseph Michael’s late father.

The centrepiece of all of this is the over fifteen-minute ‘…And They All Blew Away’. The wind motif of ‘The Tempest’ is back in full force here, this is a blustery, fast paced track when it gets going that feels far shorter than its extended runtime would suggest. There are instrumental passages here that would make Dream Theater jealous, with the song tied together by a chorus and central hook far catchier than anything that band have released in years. It is a track worthy of closing out such a fine collection of heavy metal, which makes the band’s decision to follow it up with an acoustic cover of Boston’s ‘Long Time’ all the more baffling. It is a fine version, well executed but feels incredibly out of place.

Such complaints are merely niggles, however and fail to detract from the overall strength of the album. Curse of Autumn is a fine achievement for a band that look very much as if they are just hitting their stride. Not only that, but it is also an astonishing well-crafted blast of fresh air in a genre that has become too reliant on a few big hitters or newcomers that depend too much on nostalgia and ridiculousness to make an impact. Witherfall are something different, dark, theatrical and dangerous, and if there is any justice could become a household name themselves before too long.