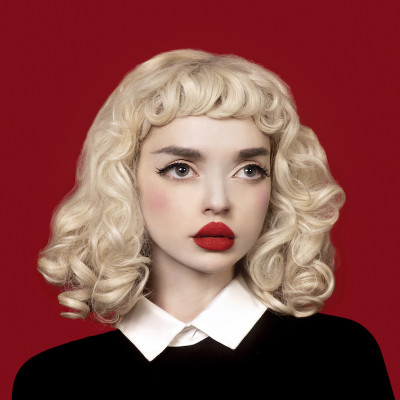 The Internet by Glume

On Glume’s debut album for the Italians Do It Better label, ‘Body’ expresses how each part of her body feels when they are working again after experiencing severe episodes of the heart condition Prinzmetal. She was diagnosed with this after a period of-time being very unwell and unknowing of the cause of her discomfort. Experiencing this rare condition, which usually occurs when resting, during the night or in the early hours of the morning, is reflected on The Internet and how the former child actress and tap dancer has re-shaped how she sees the world.

On the surface the twelve songs form a sugar laden dayglo synthy dream pop record, but underneath the bright fluorescent lights there is a melancholic undertow which reveals an intriguing depth. Imagine Lara Del Ray, Weyes Blood, MotherMary, Joon, Chromatics and other Italians Do It Better label-mates, St Vincent, and a David Lynchian pop movie soundtrack all selected for an algorithm and Glume is what you might get directed back at you in return.

While the album is openly canvassed in synthy soundscapes and supplemented in places with strings arranged by Ross Wariner, there is plenty of variety across the album’s twelve tracks. There are the immediate bright ‘n’ dreamy pop numbers; ‘What Is A feeling’ is undercut by a light throbbing bass pulse as Glume sings as if she is made of air. It’s a soft but bubbly earworm of a tune. The poppy wash of ‘Nervous Breakdown’ and ‘Get Low’ both hit the dancefloor with the latter coming on like early Gary Numan battling it out with St Vincent in a David Lynch run nightclub.

But, there is also a cinematic/TV soundtrack vibe on ‘Don’t @ Me.’ One guesses she is a huge fan of Stranger Things or at the very least the theme tune. And there are the slow burners which creep up on you after several plays like the gorgeously gentle simmering heat and slow energy of ‘Heatwave’. The abstract dreamscapes of ‘Blossom’ reveals Glume ”wants it all’’, ”get married, house, fire, and some chickens” and ”a baby” reveals a strong determination to live a life she desires, while the music may be indicating all of this could be a pipe dream.

There are also the warped soundscapes of ‘Crushed Velvet’ that has Glume’s mixing a half talking, half singing style over cascading blobs being the standout among the extra piled on dreamy numbers. As the latter stages do have a habit to drift aimlessly a bit too much for those to stick in this reviewer’s mind.

However, there is still plenty to enjoy as Glume has produced an intelligent pop debut that combines a modern/futuristic sound vision with a D.I.Y electronica pop made at home vibe and practicality, while indicating there is a lot more going on than just the overtly shiny glean may initially indicate.