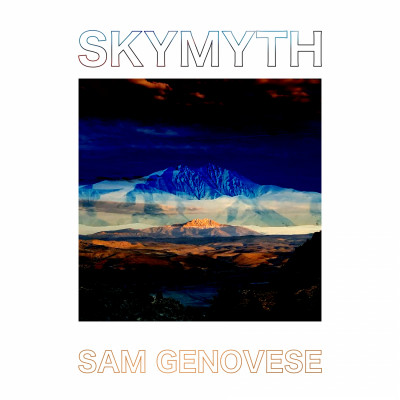 CD times seem to be passing away, so are the times when we get more than an hour of music all in one place. Of course, unless you are listening to digital files, streaming, or a double or triple album…Just a passing thought upon encountering Sam Genovese’s latest release, SKYMYTH. Actually, it shouldn’t matter how long the album is, but what kind of music you get and how good it is, and the composer has come up with one such long (and winding) series of musical sculptures if you will on his seventh release.

But, is it worth sitting through an hour of music that has more to do with cinematic images than standard song structures? And at that, we are talking about sound images inspired by European and experimental cinema, with the accent on experimental in both instances?

Actually, you don’t have to go any further than the introductory theme, ‘Processional: Ascending Numinous Mountain’. For its 35 minutes, we seem to get Genovese’s alternate vision of Werner Herzog’s Aguirre, the Wrath of God extraordinary film and Popol Vuh’s no less extraordinary soundtrack. And it is worth the trouble, even if you stop listening there.

But you shouldn’t. Because after its seemingly calm flow, Genovese goes into other directions. ‘Image Storm’ is exactly what its title says, an exploding electronic music piece akin to Jackson Pollock’s paintings. ‘Vatic Projection’, on the other hand, takes us to some very dark and undiscovered places, while ‘Signals for Signs’ sounds like an electronic re-interpretation of renaissance church music gone awry.

It all ends with ‘Palm-to-Palm We Greet Aeons’ that can fit any set of experimental images you wish, taking us back into more calmer, but at the same time with a somewhat sinister territory as the album began.

Genovese’s SKYMYTH is certainly demanding, but ultimately a rewarding listen for all those who think their music should be thought-inspiring too.