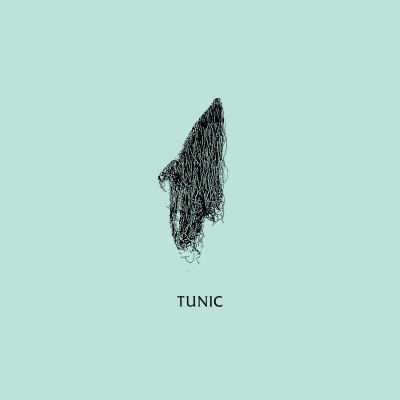 Canada’s produced some great punk and noise rock bands over the last 20 or so years, but even by that country’s standards, I was hugely impressed when I heard Complexion (2019), the debut album by Winnipeg trio tunic. This was an album that combined the treble-heavy feedback of METZ, the pummelling bass of KEN mode, and the shrieked vocal stylings of Future of the Left, all while showcasing a sound that was completely the band’s own. The band’s second album, Exhaling, therefore has a very high bar to meet. Does it do so? In a word, yes.

The title track, ‘Invalid’, and ‘Fade Out’ make for one of the strongest sets of opening three tracks I’ve heard on any album for a good long while. On the latter song in particular, David Schellenberg, Rory Ellis, and Dan Unger all give their instruments a bloody good thrashing while Schellenberg screams angrily about his friend’s loss of sight following a multiple sclerosis diagnosis. Ellis thrashes his bass very effectively on ‘Nylon’, while Unger shows theirself to be one of the fastest, hardest, most powerful drummers in noise rock today on ‘Disappointment’, ‘Hesitant Gesture’, and ‘Will Know’.

The intro to ‘Radius’ is somewhat slower, darker, and gloomier than what has gone before it, before the band speed things up and Schellenberg resumes his screaming. It should be stated at this point that Schellenberg’s screaming is of excellent quality throughout this album, and he could even give the lead singers of bands like Touche Amore and Jeromes Dream where that’s the central appeal a run for their money in the vocal department.

Ellis’s bass has this great, late 70s, post-punk feel to it on ‘Shaking Hands’, which is bolstered by the slightly Andy Gill-ish sound to Schellenberg’s fretboard attacks that he maintains throughout ‘Mumbled’ and ‘Eye Contact’. Aptly enough given its title, ‘Boss’ makes for a terrifically heavy and menacing track. After the album finished, I was impressed by how well the band have developed a sound that balances raw production and delivery with obviously accomplished musicianship. It’s a difficult trick to pull off, but tunic have managed it.

Given how strong a debut album Complexion was, tunic fans will understandably have high expectations of Exhaling. The band have exceeded the extremely high bar that that album set. Whilst a press release announcing the ‘Fade Out’ single promised “a little more melody and traditional songwriting than our previous work”, there are still more than enough noisy punk songs here to satisfy devotees of the genre. Roll on the day when we can see these songs live. This is a deeply satisfying piece of work, and will quite possibly prove to be one of the best noise rock albums of this year. Impressive stuff.