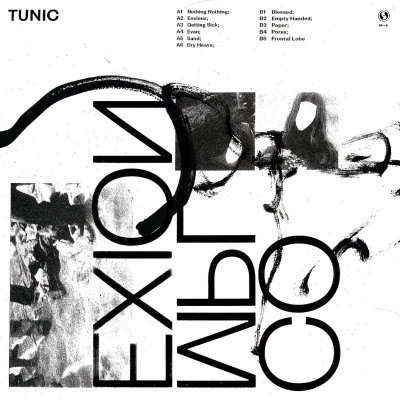 After releasing several DIY singles and playing a range of gigs in unusual locations like disused prisons, Winnipeg noise punk trio Tunic are releasing their debut album, Complexion. The album is great, making the listener sit up and pay attention to its 11 tracks of rage and fury. In terms of their noise rock countrymen, the band sound like a faster METZ or a less metallic KEN mode. Oddly, lead vocalist David Schellenberg sounds most similar to Welsh Future of the Left singer Andrew Falkous, except with less humour and more anger in his voice.

The album kicks off with the rip-roaring lead single ‘Nothing Nothing’, with Schellenberg screaming that he “can’t believe this”. His guitars sound somewhat like early Drive Like Jehu on ‘Envious’, before taking a bizarrely Chuck Berry-ish turn 12 seconds into ‘Getting Sick’. ‘Evan’ slows things down (but only slightly) and sounds mathier than the preceding songs. ‘Dry Heave’ features some of the album’s best screaming as well as some very dynamic bass-playing from Rory Ellis. At this point, it’s worth mentioning that the rhythm section don’t put a foot wrong on this album, giving their respective instruments a real pounding but without ever compromising on precision.

Schellenberg’s vocals sound like they’ve been fed through a Satanic-sounding voice distorter on ‘Blessed’, which makes for a brilliantly disconcerting start to the album’s second half. ‘Empty Handed’ is more reflective in tone. However, Schellenberg’s fury returns in full-throated fashion on ‘Pores’, which also features some of Complexion’s best guitar-playing, the multi-tracked nature of which may prove challenging for him to replicate live. Dispensing with the trend for albums to close with their longest song, ‘Frontal Lobe’ concludes the LP with just as much of a short, sharp shock as it begun, and is over and done with in well under two minutes.

Complexion is one of the best debut albums I’ve heard for quite some time. The songs are charged through with such confidence and brio that you’d think Tunic had been around for a great many years longer than they have. The LP should appeal to fans of bands like Unsane, KEN mode, METZ, and Future of the Left. It is clearly going to stand out as one of the year’s strongest noise rock albums and has whetted this reviewer’s appetite with regards to the prospect of seeing the songs performed in a live setting. Impressive stuff.