(((O))) Interview: Zvijer – The Barbaric Roots of the Balkans 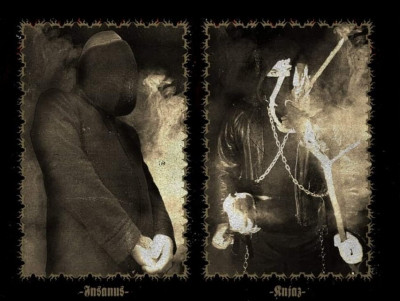 We play black metal, our roots are in the Balkans, and our regions are known for a very cruel and barbaric history with a lot of bloodshed and dead people. It is one of the sources of our inspiration.

From the former Yugoslavian Republic hails the band Zvijer, a multi-national entity that brings a type of black metal that feels and tastes like its origins. Balkanian Barbaric Black Metal is what they like to call it themselves. The band has been going strong since 2013 and last year they released their second full length, titled Navia (Zadah Jalovog Svijeta).

Zvijer is Serbo-Croatian for beast. The band is currently located in Serbia. Knjaz is the bandleader and founder, running the horde since its early days. It’s not his only project, he has many, and they cross borders. Yet, with a small scene, there are also many challenges. We discuss these at length, including the folklore and ideas that inspire the band in their unique brand of black metal.

Thanks to Knjaz and drummer Insanus for their time to answer my questions.

E&D: How is Zvijer doing? How has the pandemic affected you guys and your band?

Knjaz: Greetings. All is well. A new album is coming out soon and we are preparing some new songs. I would say that this pandemic has not changed many things in our work and attitude towards music, and life in general. We do our jobs, we play, everything is in the best order. Although you can’t travel abroad, it never meant much to us anyway.

E&D: First things first, how did Zvijer get started and what has been your path towards the style of music you play as individuals? You also have plenty of other projects, could you tell something about those?

Knjaz: The former guitarist and I started the band back in the summer of 2013. We wanted to make a band through which we would be able to deal with topics like the cult of night, Balkanian old funeral customs, the dark folklore of the Balkan countries, and so on. Then, in 2016 Insanus joined the band and after the first album we continued as a two-man band. We work easiest when the two of us are alone, everything goes faster and without problems. Our music is a reflection of our thoughts and all personal attitudes that we express through words and tones. The basic motive and mover that fuel fires in us is freedom. The absolute freedom we have at work is all we need.

E&D: What does the phrase Barbaric Balkan Black Metal mean for you guys? How did you arrive at this definition of your sound?

Knjaz: “Balkanian Barbaric Black Metal” is a phrase that we have adopted as the best description of our music. We play black metal, our roots are in the Balkans, and our regions are known for a very cruel and barbaric history with a lot of bloodshed and dead people. It is one of the sources of our inspiration. Therefore, it was natural for us to take that determinant for our sound.

E&D: You are about to release a brand new album, titled Navia (Zadah Jalovog Svijeta). What can you tell about this album and its concept?

Knjaz: Yes, our second album Navia (Zadah Jalovog Svijeta) is officially out on December 4th, and it will be released by Seance Records from Australia The concept behind this material is human alienation from the world. It is possible to function “normally” among people, and at the same time be lonely and cut off from humanity. The idea is to evoke a feeling of isolation and enjoyment in solitude through music and lyrics. Musically, this album is quite different from the previous one, but for us it is a logical step forward. We evolved with sound, so this came to us quite normally, and it’s up to the fans to listen, compare and see if they like the new material or not.

E&D: What was the writing and recording process like?

Insanus: Before entering the studio we had some skeletons of the songs, but in the process of creating and recording songs those skeletons were changed almost to the point of unrecognizability, so we can say that we are creating our songs directly in the studio. Having in mind that we are a two-man band, and I’m responsible for all instruments, that proves for us to be the easiest and quickest way of creating music. I recorded all instruments in my own studio. Vocals were recorded at the peak of the first wave of COVID-19  and all studios around Knjaz were closed, so he did his vocals in an improvised studio in his room or attic, I’m not sure, with even more improvised equipment which gave us that raw sound that fits our music perfectly.

E&D: As I have not had the luxury to listen to it, can you tell what listeners can expect from this record and in what way your sound is changing from the previous album to this one?

Knjaz: I could not give an objective answer to this question. People will have to wait a little longer to listen to our album. The material will be available on most major streaming platforms but probably also on many pirate download sites very soon, so it will be available to everyone. In my personal opinion, the album is much better than the first one, but in terms of the evolution of the band. Every song we’ve done, I’m proud of it, but I think ‘Navia’ is the current band’s highlight. I will enjoy it until we release the third album, with which I hope we will be able to surpass this one.

E&D: As I understand it, Zvijer is originally from Bosnia but currently ‘based’ in Serbia. Can you explain how that works? And as an outsider, what are the relationships like with other bands and artists from former Yugoslavian countries?

Knjaz: Zvijer was originated from Banja Luka (Bosnia), I am still in Banja Luka. Insanus is from Rijeka (Croatia), but currently lives in England. Honestly, I wouldn’t know. The internet has made it easier to interact, but we have a fairly small circle of people we work with and are in contact with.

E&D: What is the Black Plague Circle?

Knjaz: If you think of the Black Plague Circle; that is a group of people and bands like Obskuritatem Nigrum Ignis Circuli, Deathcircle, Niteris, Master’s Voice and Void Prayer.

E&D: How is the regional scene doing and what bands should people really check out?

Knjaz: There’s a few good bands in Balkan region; bands like Nadsvest, Arjen, Void Prayer, Old Night, Zlobnik, Zloslut. That is from the metal scene, but I am more into punk bands.

E&D: Is there a political component to Zvijer or the regional scene? I couldn’t help but notice some association to certain ‘politically inspired’ bands from a former band member.

Knjaz: Zvijer has nothing to do with politics. As I said above, all we are interested in the band is the history of Balkan, the concept of death, and dark folklore. We are not politicians but musicians, so there is nothing that would interest us in the world of political malarkey.

Yes, our former member is in NSBM. You see, generally, metal scenes in ex-Yugoslavia countries are quite small, and the black metal scene is even smaller. So at this or that moment, everyone will always be in touch, no matter if you are NSBM, Antifa, Satanist or pagan. So everyone does what they want, we don’t mind as long as it doesn’t touch us. Insanus and I know how we want our music to sound and what it should be inspired by.

E&D: What sort of concepts or stories inspire your music? As I understand it folklore is a part of it. I would love to get a bit more insight into what sort of dark folklore it is that inspires you, as it is obviously not familiar to me (and I’m curious).

Knjaz: These areas are rich in stories about werewolves, vampires, local demons, and also a large and rich part of our history is occupied by Slavic gods. It is all part of us, our origins, our pride and our history. We want our music, in its originality, to have authentic lyrics behind them in topics that are close to us and that are familiar to us. That is the main reason why we write about it. Every slightly larger village here and in rural areas surely has 10 or more stories of local demons, necromancy, vampirism, fear of the night, etc.

E&D: What are the future plans for Zvijer at this moment (if the pandemic lets us do normal stuff again)?

Knjaz: I don’t know what is meant by normal things. We are continuing our plans in this pandemic period as well. We are preparing new songs, we have some concepts that we want to materialize. One is sure, we have no plans of doing any live gigs in the near future.

E&D: If Zvijer was a dish, what would it be and why?

Knjaz: Probably pale white aged bone, torn from a bear’s carcass on mountain Kozara. Someone sees that as a dish.