(((O))) Review: Herzschlager – All The Nights Are Done 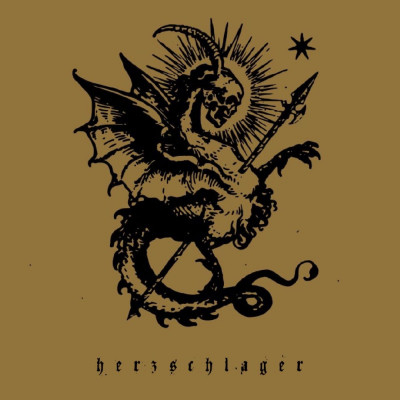 All The Nights Are Done by Herzschlager

I have a confession. It feels a little blasphemous to say it out loud, but here goes: I don’t like mosh pits. They hurt, and not in a good way. But listening to the debut EP All The Nights Are Done by Herzschlager, a side-project by some of the lads from Allfather, I just might dive in to one when live shows come back.

From start to finish, the EP explodes with the kind of energy that sends moshers flying into each other. The riffs come lightning fast on top of thunderous drums, all of which make a wall of sound that feels, to quote the opening track, “un-fucking-stoppable.” And what a blinder of an opener ‘Unstoppable Herz’ is. From the opening drumbeats and slide notes through the machine-gun riffs that drive it forward, it’s like listening to a rhinoceros stampede. The energy from it is incredible. This is exactly the kind of song that would open up a pit in a grimy punk club. Across the EP, the sound comes off like XII Boar on a crust-punk kick: it’s hardcore punk ’n’ roll and glorious fun throughout.

Before I settle into my usual effusive praise of anything made by the lads in Allfather, I should probably discuss the elephant in the room of the EP’s one glaring flaw. It’s only fifteen minutes long. If you’re not paying attention, the whole thing feels like it’s over before it’s even begun. But that’s your fault for not paying attention. Because you absolutely should be. Not only is the music an electrifying sound guaranteed to set heads banging and pits moshing, but the lyrics deftly convey lockdown frustration and personal emotions.

Take the lyrics of ‘Lazarus Moment,’ for example. “Days and nights feels like your stuck in the mud/Like you’ll never be free.” The quarantine and isolation of lockdown definitely made me feel like I was stuck in the mud. But, as the title suggests, we’re all soon to have our “Lazarus moment” and be reborn into a world where we can feel free again. Here’s hoping we’ll have a good time. But it’s not all frustration and anger. Herzschlager even evoke bleak sadness on the self-titled album closer. The drums fall silent, Tom Ballard’s guttural vocals stop, and Alan Cordner’s guitar broods in emotionally resonant solitude for a moment. Just a moment – it’s all over in about twenty seconds – but it’s a powerful one. Everything stops not just for a momentary auditory breather but to allow the listener to fully comprehend the wretched misery on display in lyrics like “It fucking kills me/when we’re apart/It fucking kills me/Like a punch to the heart.” This is a poignant expression of the grief of forcible isolation and solitude, tugging hard on the heartstrings. It also serves to make the whole EP a vehicle for catharsis – both musicians involved have been staring into the depressing lockdown abyss just like the listeners and it’s quite something to have that acknowledged in such a powerful manner.

Impressive, then, that everything here comes from just two musicians. It’s just Cordner and Ballard (buddy-cop comedy-crime caper coming soon to an imagination near you) making everything, kept apart as they have been from their Allfather bandmates. Ballard’s vocals are on fine display, and Cordner’s work as the multi-instrumentalist on everything else is phenomenal. Herzschlager may have been spurred into action by lockdown, but I hope to goodness there’s more to come from the duo.

Brief as the EP is, All The Nights Are Done will not only sate the thirst of Allfather fans for new music, but also gets listeners pumped for the hopefully-imminent reopening of live music venues. It’s a cathartic listen, guaranteed to get open pits when live shows come back (though I’ll be keeping my distance). All the nights might be done, but here’s hoping the same isn’t true of Herzschlager.