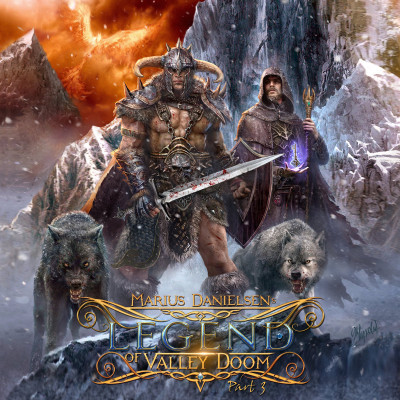 Oh my word, this is glorious. Everything about this album is so, so satisfying. Hooks big enough to snare a whale? Yep. Shredding yet well-judged guitar solos? Oh yes. Melody to stick in your head hours – days – after listening? Yes again. Sheer epicosity, humungousness and metacular stupendousness? Hell yes.

And as well as all that, we get a conclusion to the star-studded fantasy metal-opera which has been Marius Danielsen’s quest for the last 16 years or so. Part One, which was the culmination of a 10-year project, was released in 2015, with Part Two three years later. They were incredible; bright, shiny metal, played with the power of a jet engine. Songs from both albums are still included on my rousing, plaster-a-grin-on-my-face playlist, alongside the likes of Iron Maiden, Theocracy, Dragonforce and – of course – Manowar.

Because that is the great thing about power metal. There are very few occasions which a quick blast of high quality harmonies, guitar solos, double-kick drums and major-key riffs will not improve. Driving fast, filling out spreadsheets, cooking breakfast, cleaning hen houses: all have been made more enjoyable with power metal – and this album in particular.

Before we go any further, know this: if you think power metal is merely a “guilty pleasure”, and undeserving of its place at the table of trve or kvlt then stop right now. Because it rules. It is the most fun kind of metal – except possibly hair metal or party metal, but that is an argument for another time.

Now we have the ground rules sorted, it is worth recapping the story of Valley Doom. In Part One, we witnessed the murder of a king by a dark lord in the Battle of Bargor-Zun. He then assumed power over Valley Doom, whose citizens had a massive battle (depicted in awesome metal by “Raise Your Shields”) then found themselves banished.

In Part Two, they were welcomed into Eunomia – and in true three-act movie-writing fashion, the action tapered off a little as plot details were hammered out. Mid-tempo, chest-filling ballads dominated the album, as the exiles found they had to find seven ancient artefacts with which to oust the dark lord. They found one, after meeting a dragon, but we were left on a cliff-hanger.

And now we are at Part Three – and in the first song, ‘Seven Ancient Artefacts’ we are told, in a chorus that is so catchy that the listener feels obliged to sing along with whether they want to or not: “We are on a journey to find the six remaining artefacts.”

And this is very much the third act: involving action, climax, resolution. There is a visit to a former dwarf mine – since taken over by evil forces – the discovery of a knight fallen on hard times (but who, crucially, holds one of the prizes) and another couple of massive battles. All told in high-energy fashion, with marvellous songcraft, high-gloss, excellent production and lyrics that only very occasionally stray into the realms of cartoonish.

Much was made of the lengthy list of metal stars that appeared on the first two parts of this epic – indeed, Part One first piqued my interest when I saw that Manowar’s Ross the Boss contributed a guitar solo. This line-up is similarly heaving with talent – all 40-odd of them, including Tim ‘Ripper’ Owens, Melissa Bonny, Daniel Heiman and Jennifer Batten – but much of the credit should be given to Maruis Danielsen and his brother Peter, who is on keys and constructs much of the orchestration, for creating such fine songs for the big names to work with.

All throughout the trilogy the songs have been immensely enjoyable – and in this final part, the songwriting is stronger than ever. There are small nods to songs from the previous two parts, both lyrically and musically, making each element part of a huge whole.

Take the first four tracks: after the aforementioned ‘Artefacts’ comes ‘Journey to the North’ with a chorus that almost commands you to jump aboard a horse and gallop over a mountain pass. And that is even before the key change. Then ‘The Ballad of Arnoth the Wild’ (the aforementioned exiled knight) slows things down a bit but again, the chorus is absolutely gorgeous.

Even among this treasure trove of power-metal classics, there are clear highlights. The lead single ‘The Stars Will Light the Way’ features some iron-lunged wails and yet another super-catchy chorus, while whoever played the guitar solo at the beginning of ‘The Mines of Eloroth’ deserves their own Sarlinian Bow from the Tree of Life. Oh, speaking of which, ‘Sarlinian Bow’, featuring Anniken Rasmussen, Marius Danielsen’s wife, is another gem.

The whole story is wrapped up by the enormous nine-minute epic ‘For The King and For Our Land’. Towards the end we hear a reprise to the very first song in the trilogy, when the citizens sing “We rise from the ashes, like a phoenix we fly high” – the very phrase they sang after the Battle of Bargor-Zun. It is a clever way to bookend the trilogy and gives a very rewarding final chapter. And at the risk of sounding demanding, now that the story is complete… wouldn’t it be great to see the whole thing live?