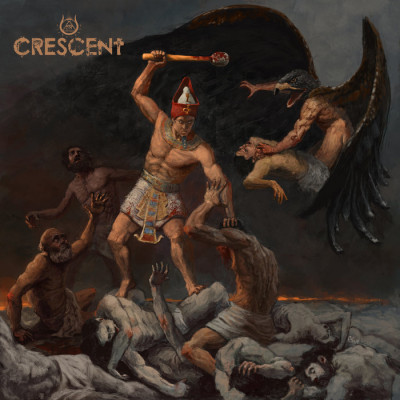 Carving the Fires of Akhet by Crescent

Crescent are a band who take their time. Formed in 1998, with a first full-length LP released in 2008, Carving the Fires of Akhet is only their third album in 13 years. But still, you can’t rush perfection. What attracted me to their second outing, 2017’s The Order of Amenti, was their dense but melodic sound, with furious tremeloed riffing that insinuates itself into the listener’s mind. Threading through this is an almost indefinable vibe that sets them apart by the very nature of the band’s origins in Egypt. Lyrically and thematically this band is rooted in the history and mythology of their home country, and this comes forward in the music too, with a particular guitar tone and aura. Nile comparisons are likely, but Crescent plough their own distinctive furrow, and benefit from calling that country home.

Carving the Fires of Akhet builds on the previous album with an incredibly intricate and woven death metal sound. Starting with the 8-minute epic ‘The Fires of Akhet’, which is dense and takes several listens to get into properly, this is a multi-layered beast. Lyrically the album title and this track holds the whole album together, with the PR material saying that “The Fires of Akhet represents the great divine will that was carved into humanity’s history and future”. Crashing in at the start with almost black-metal-style frenzied drum and guitar work, there’s an extended atmospheric interlude, complete with hand drums and mystic chanting that drives home the theme of the music, before the whole thing builds to crushing dissonant thunder.

There are more traditional heavy metal melodies and structures in following tracks ‘Moot Set Waas’ and ‘Serpent of Avaris’, with the melody and riffing coming to the fore, underpinned by the threatening growled vocals. ‘Serpent …’ is punctuated by a thunderous bass note that sounds like the banging of a massive gong. Tempos are varied, from the slower passages in ‘Serpent …’ to the furious ‘Imprecations upon Thy Flame’. The drumming is tight and fast throughout, underpinning the dense guitar work. The tremeloed guitar sound is never far away, but the constant melodic guitar riffs that thread through the music, plus the frequent changing of pace, mean that the listener’s interest never wanes and the music sounds fresh throughout. The atmospheric interlude that is ‘Crimson Descension’, again with hand drums, only serves to anchor the album in the Egyptian theme. This only serves to hold up the last new track, ‘As Nu Enshrines Death’, as the true, epic album closer.

Following this, there is a revamp of an older Crescent track, ‘Dreamland’ which sounds altogether different: faster, cleaner, with less gravitas. You can see how the band have developed. Tagged on the end are two covers: the first by Dissection and the second by the mighty Bolt Thrower, with Crescent paying homage to their heroes and influences. The Bolt Thrower song in particular, ‘…For Victory’ is very faithful, right down to vocal style!

All in all, Carving the Fires of Akhet shows Crescent evolving as a band, and continuing to develop their unique sound. It’s an album of dense, atmospheric death metal with some great melodies woven in.