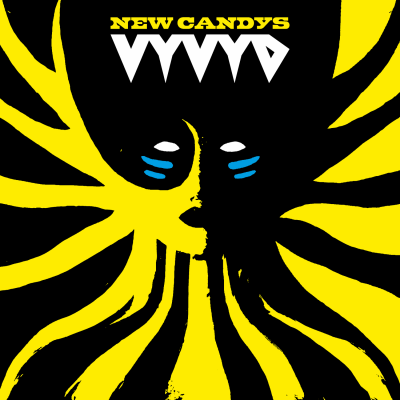 I first latched onto New Candys on my friend Collin Axel’s terrific Picture In My Ear Records. It was around the time New Candys As Medicine came out in 2015 and I adored this Venetian band’s mind-expanding sonics. I mean, who needs to drop acid when you have music like this to take you there instantly?

This new album Vyvyd (Vivid) dropped on June 4th. It follows the widely acclaimed third album Bleeding Magenta, which saw the group tour non-stop across Europe, UK, North America and Australia. The album was recorded at Fox Studio in Venice by Andrea Volpato and was mixed and mastered by Grammy Award producers Tommaso Colliva (JMC) and Giovanni Versari respectively. It is the first album created with the new band line-up of Fernando Nuti, Andrea Volpato, Alessandro Boschiero and Dario Lucchesi. It is available through Little Cloud Records and Dischi Sotterranei, plus an exclusive vinyl edition available through Fuzz Club. Band leader Fernando Nuti started writing songs during a chaotic period with many lineup changes. But as soon as the new members came together, they all clicked and the sound gelled. Songs were written and recorded in different fragmented sessions between 2018-2020, between tours.

The lead off track is also the first single, ‘Twin Mime’. It revels in fuzzy sonics, a massive central hook, and a firm command of instrumentation and production. Guitars both sparkle like diamonds before lopping off the top of your head with buzzsaw feedback. Put on repeat, you won’t be able to help yourself. It was the last song written for this song suite and delves into the meaning of duality, exploring the connection between action and consequence. “Zyko” hits equally hard, hammering at your ears with its insistent riff. Another one you will keep revisiting, of that I am sure. These guys know how to pour on the feedback, but then dial it back to more reasonable levels, giving your tinnitus a chance to recover before the next onslaught.

I really dig ‘Factice’, though before I checked the song listing, I thought they were saying ‘Fact Is’. Perhaps that is intentional! This one could fit into several genres, and is potentially more straightforward and even has some ominous undertones which are thrilling. ‘Begin Again’ is drenched with trippy sounds and ranks as a firm favorite of this writer. Certainly the melody ranks as one of their best, and is a standout track among an entire album of winning songs. Excellent work, guys! ‘Evil Evil’ is a shift in style with a Motorik framework sliding over pounding percussion and squealing guitar.

‘Helluva Zoo’ hovers close to other psychedelic predecessors like The Brian Jonestown Experience, with laid back grooves and a mellower feel. But don’t get complacent, for ‘The Clockmaker’ is on its way and it is sure to stir the pot again. I like the bass line here, as it defines the entire first part of this song. The drums follow in lockstep and this is a tightly wound and terrific tune. ‘Q&K’ opens the curtain to softer sounds, with hazily defined vocals and a dreamy sonic tapestry. ‘Snake Eat Snake’ has a tribal backbeat, with an inviting vocal line, drawing you down to the very end of this fine recording.

Run, do not walk, to your closest record emporium or digital site and pick up this record. It will not disappoint and already ranks in my best of 2021 list. Highly recommended for all fans of finely rendered psych with strong melodies and sharply executed song structures.