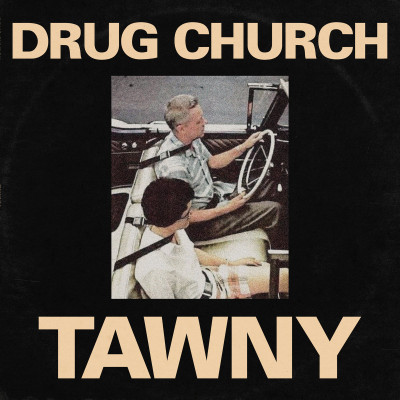 It’s always refreshing when a bands lyrics and themes never age in the greater zeitgeist of what’s going on in the world – this has never been more true for Albany/LA based punk/hardcore hitters Drug Church.

I’ve made jokes throughout the years of following this band that certain life events or mundane moments are “just like a Drug Church song”, but life over the last 18 months have felt far too close to home with their lyrical themes of financial struggle, authoritative disdain, the rigmarole of routine and resistance to a constant working life. This new EP, Tawny, is no exception and continues to sharpen the peak that 2018’s full-length Cheer brought the band to.

As an entree for the upcoming fourth album, Tawny manages to wrangle the band’s punch, melodicism and dynamic songwriting all in its compact runtime. ‘Head Off’ is a woozy slab of 90’s alt melancholy, hazy with a notion of nihilism oozing throughout. Kindlon demonstrates the contrast of his usual yelled vocal style and his more spoken-word croon that became full fledged on Cheer. The title track follows and is easily one of their most anthemic songs to date, adding to their already packed gauntlet of scream-along tracks in a live setting. An infectious opening riff and viscerally visual hook of “a tawny pale glow/headlights in a ditch below” makes for a perfect Drug Church song.

2020’s ‘Bliss Out’ fits perfectly as an assailing follow-up, before flowing into their cover of Arcwelder’s ‘Remember To Forget’, a band which Kindlon has said are ‘guys who like playing guitar music who had small successes at it’ – an attitude of realism that’s always been a part of Drug Church’s approach to making music in the vein of punk and hardcore, making the cover all the more fitting.

It’s safe to say that Drug Church have tapped into something that they’re only going to master even further – with Cheer and Tawny as the indicators, LP 4 will be perfect guitar music for the reopening of the world.