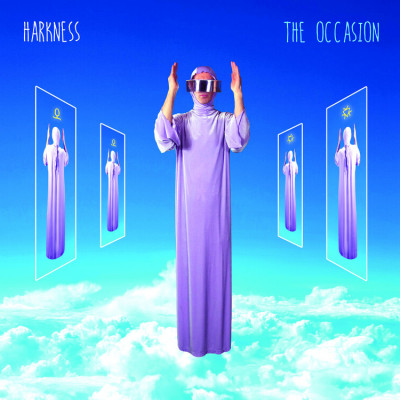 The Occasion by Harkness

Masked music artists are nothing new or uncommon, and there are quite a few members of the potential audience that steer clear of the ‘masked marauders’ with the idea that they are trying to get by with a gimmick.

Toronto’s Harkness is yet another artist to come up with a persona, using a gown and a visor. Since The Occasion is his debut, the chance of those more skeptical members of the potential audience passing on his album grows even further.

Which would essentially be quite a big mistake, particularly if you are a fan of orchestrated, harmony pop/rock laced in good doses of good ole psychedelia.

If you dig a bit deeper, even before a first listen, you can realize that Harkness doesn’t take his art lightly. It actually took him a good decade to come up and release this album. The eight-minute-long title-track opener can give you a good idea why it took him so long. It is all orchestrated sample-like runs with Harkness bringing in his obvious full-fledged knowledge of everything from classics to Beach Boys and acid psych. And it works almost impeccably, here, there, and everywhere (on the album), to quote certain Mr. McCartney.

The Occasion is also a self-produced affair from this multi-instrumentalist, who seems not to miss a step on his initial outing, the quality of which makes you wonder – what can (and will) he do for a follow-up?