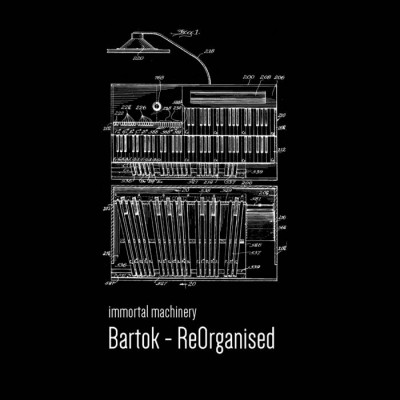 Hungarian classical composer can be an acquired taste, even for some ardent classical music fans, let alone those more attuned to more modern sounds. So, for any modern music artist to pick up on Bartok’s music and try to ‘re-organize’ it is a bold move just in itself. You probably make your task twice as harder if you operate under the artistic name Immortal Machinery.

And it is a duo of Steph K (violin, electric organ, piano) and Mateusz G (electric and upright bass, drum programming) who operate as Immortal Machinery that undertakes reworking Hungarian composer Bela Bartok with their Bartok – ReOrganised mini album.

So how do you stay true to Bartok and those that like his ‘original’ music on one side, and still present it in a completely different context and engage an audience that just might not be so familiar with the composer’s music?

On the evidence of the album, seemingly easy, but those more familiar with the Hungarian composer can tell you how hard it is sometimes to penetrate to the essence of Bartok’s music, let alone present some form of interpretation that also includes a personal vision of that music that is at the same time interesting and engaging.

And Immortal Machinery’s reorganized Bartok actually has all those elements in abundance, whether it is the more electronic/orchestral vision of ‘Allegro Molto’ or the calmer piano-led ‘Melody in the Mist.’

Yet another reason Immortal Machinery’s vision of Bartok is successful might lie in the fact that the duo obviously knows the composer’s works so well. They are aware that Bartok can often be most potent in small doses, hence a mini album.