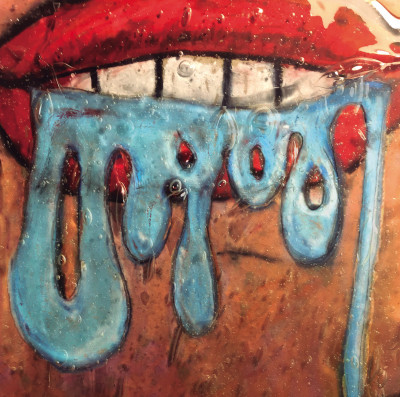 I’ve seen Part Chimp play several times and have always found them to be one of the most incredible live bands in the UK, their trademark racket of noise and riffs never ceases to be a crowdpleaser and as such whenever I see the name of the group attached to anything, I immediately buy-in. If they’re playing a gig in London, I’m going, if they’re releasing an album, I’m listening and thankfully, in this case I got to review it so, I could get my hands on Drool early.

Unfortunately, my laptop broke and took me out of action for a few months so, the review that you’re going to get it is basically going to be opinions formed by my initial listening and also, it’s gonna have that more informed perspective of me returning to the album after some time away, which I think should give me a more solid grounding in approaching it overall. Who knows? I guess, we’ll just have to see.

‘Back From The Dead’ kicks off the album, I feel like they played this at The Lexington’s birthday party at the start of 2020? I might be wrong, but it sounds like quintessential Part Chimp to me and is aptly titled as the first new track from the band in three years (I think?). It’s all there, Tim’s idiosyncratic tone and stomping riffs, Ian’s explosive lead guitar, Joe’s crunchy bass tone and Jon’s absolutely mammoth drumming. Every single member of the band absolutely bludgeons their instrument on every track and this is no different.

It weirdly feels like a best of Part Chimp to me but, with all new tracks. Like they’ve finally taken all of the best bits of their releases so far and sewn it into one relentless, simian classic. They’ve become full chimp. Mecha Part Chimp. The first three tracks are an absolute mosh-fest, rounded out with ‘Wallow’s squealing, gum-dragged-over-a-cliff-edge vocals and ‘One In The Eye’s full-band stampede. ‘Clever’ breaks things up fairly literally, chopping the rhythm up into stabbing rhythms building to a swirling waltzer of a climax.

After a brief interlude, head-banging title track ‘Drool’ struts into the album with ample groove and a fuck tone of distortion. In a way, it reminds me of Pigx7’s ‘Gloamer’, the track just has so much swagger, that it becomes instantly infectious. The ending is mind-glowingly rapturous as well. I feel like this one is gonna be absolutely lethal at a gig. Tim’s vocals are gonna make heads explode Scanners or, I guess ‘Master Exploder’… ‘Up With Notes’ is an instant classic. The guitar licks are amazing and the rhythm section is fucking nuts. Jon’s drum fills are fucking killer on this track.

‘Dirty Birdy’ is another particularly solid entry to the album, it’s nice to have a slow jam thrown in. Something to play whilst everyone’s trying to catch their breath back from the rest of Part Chimp’s material, I guess. Sometimes you just need a minute, with this track you get approximately two minutes before being thrust face first back into the Part Chimp chip pan to fry in face-melting noise rock. Crescendo core at its finest. Just when you think you’re out, they pull you back in. ‘It’s True Man’ is fucking bonkers, Tim Farthing provides Lanegan-esque guest vocals and the force of two Tims is simply too tumultuous to last that much longer than two minutes. Such a trashy tune, it’s fucking awesome. Definitely one of the best tracks of the album, I’d listen to an entire album of this collaboration. Farthing brings the fucking ruckus.

The final two tracks on the album are ‘USisA’ and ‘Worms’. The former tracks is an another one of these songs that to me just sounds like what I think of when I think of Part Chimp. No other bands sound like them, but there’s something about this particular style of vocals Tim does and the scales they write their riffs combined with the enormousness of the rhythm section that forges this particular sound so often, that you can tell is definitive Part Chimp from about three seconds of hearing it. It does mean that there’s a lot of tracks by the band that kind of sound the same, but I’ve yet to see that as a problem.

Fun fact that just came to mind, ‘Bouncer’s Dream’ from their IV album was my alarm clock for about two years. Highly recommend it as a great way to start your day. But, I digress, ‘Worms’ closes out the album, I have no idea what the lyrics are, but he seems to be saying “worms” a lot and the frequency of this vocal colliding against the relentlessness of the instrumentation is highly palatable to my ears. Jesus Christ, what the fuck is this end bit about? That filter sweep is bonkers. Fucking Part Chimp. I don’t even know what to say anymore… I just really love their music and I think if you’re reading this and for some reason, you’ve never heard them before, it’s never too late to have one of the loudest, most unrelenting bands you’ll ever plunge you deep into the abyss of noise rock and take you prisoner.

Upon returning to this review, I realised that part of the reason that everything sounds so heavy is that the band has a new second bassist Robin Freeman, I’m not sure if that’s alternating or playing together on every track, but rather than re-write bits where I was unaware of this, I decided to write in here that, Robin’s contribution probably goes some way in explaining the even more thunderous than usual sound from the rhythm section. Here’s to hoping they expand to have two drummer as well and maybe some more other instruments so, we eventually have the deafening Part Chimp Arkestra.

Drool is yet another fine edition to the flawless discography of one of the UK’s greatest ever noise rock bands Part Chimp. Who knows where they’ll go from here, but I can’t wait to see them play again when all this fucking bollocks is over.