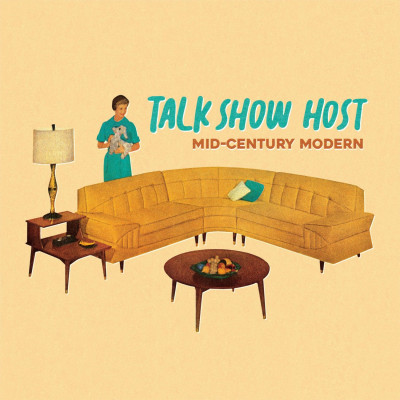 There’s a specific element of honesty in most current punky power pop bands. No big pretensions, no musical tricks, just an ongoing search for a perfect set of guitar chords and vocals with a beat that doesn’t miss a step.

Of course, such a concept is a double-edged sword. With music that seemingly sounds simple, it is a much harder thing to execute it properly. Your playing and singing could be awful or you can stick too much to some musical formulas that have been tried so many times that they begin to sound trite.

On the other hand, if you know exactly what you’re doing, and combine those ‘simple’ elements of which punk/power pop combination is composed, you are on your path to something truly catchy and exciting. And that is where Toronto’s Talk Show Host come in with their debut album Mid-Century Modern. The moment ‘You Asshole!’ opens the album, you get the feeling that these guys know exactly what they’re doing.

Their playing is pitch-perfect, out upright, upfront of the listener by the experienced production of John Dinsmore. Do Talk Show Host use set-out formulas? Sure they do. But there are two elements that make them distinct, they mix those formulas up in a manner to make their music both interesting and exciting and they really seem to feel and be excited about the music they’re making. They’re not simply going through the motions.

That actually puts them in a position to come up with songs that can actually be full-fledged hits, like ‘Warmest Condolences’. Oh and with ‘Sorry, My Mistake’ they show that they can step outside set formulas with ease.

Talk Show Host and their Mid-Century Modern show that there is still some exciting vitality left in the punk/power pop combination.