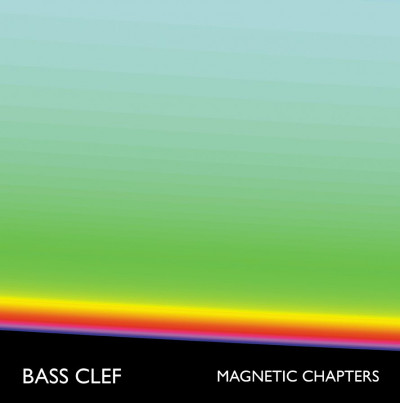 Kind of a mysterious figure Bass Clef, not excessively so, just not one to waste your time trying to draw too much attention to themselves. Last year Wrong Speed Records reissued his 2011 album Inner Space Break Free, largely so that label boss Joe could have a vinyl copy of an album he really loved. I can’t quite shake the suspicion that we wouldn’t be getting this one if not for Joe then mithering him for something new to put out as well.

Not that Magnetic Chapters is unformed or incomplete, far from it. More that Ralph Cumbers, the man sometimes known as Bass Clef, seems unconcerned by the demands of release schedules, making music for his own amusement and sending it out into the world every now and then when either the fancy strikes him or someone asks.

Bass Clef came up on the edges of Bristol’s dubstep wave but was among the artists at its margins who were less interested in the structures of club culture, instead wandering away towards something looser and more exploratory. He made modular synth stuff as Some Truths and had an improv trio with Charles Hayward and Laura Cannell, he wrote some fiction and moved to Rotterdam where this album was recorded. It probably goes without saying that Magnetic Chapters is not at all the sort of electronic music readily associated with the city. These choices to deliberately distance himself and follow an idiosyncratic path flow into music that is outside of time and place, that floats away from the dock and daydreams in the sunlight.

Opener ‘glidethrough’ sets the mood, warm and hazy, with a swaying rhythm. Bright showers of notes sparkling on its softly undulating surface. The tunes have a loose improvised feel but stay buoyant and keep moving. The insistent theme of ‘glacier beams’ repeats in a series of different tones, dialling through woodwind, xylophones and synth settings. ‘guardian angles of cloud ninety-nine’ bats around a short loop of fake strings, sounding like a playful and particularly deconstructed re-edit of The Cure. He has a knack for evocative titles, ‘a glow on a floe’ catches the track’s floating crystalline sounds, ‘intergalactic biodomes’ feels like a walk through a swamp buzzing with electric cicadas. It also recalls 70’s sci-fi Silent Running, letting you imagine yourself drifting in space worrying about ecological collapse. Which, in a sense, you probably are. Still, there’s a sweet little coda that blossoms as you reach the end.

The overall feel of Magnetic Chapters is soft and summery, less vivid or acid edged than his last one, 111 angelic MIDI cascade. It’s still not really ambient, although it is more relaxing. The title nods to the tracks being recorded on an old 8-track. Maybe that accounts for the comforting nostalgic texture in amongst the free form futurism. This music is half awake, a blur of memory and dream, it lets your thoughts unravel. ‘Scintillater’ cooks up thin percolating electro beats and lush rounded keys, it’s like the soundtrack to an imaginary old arcade game that had you sipping cocktails on a neon tropical beach, watching pixelated waves crash on the shore.

Magnetic Chapters is ideal for such flights of idle fancy, for accompanying you on pedalo rides or park bench sulks, on low key adventures or calm afternoons laying on the grass. It brings a veil of pleasing colour to tedious shopping trips and a helpful sense of calm whenever it’s playing.