(((O))) Review: Charlie Parr – Last of the Better Days Ahead 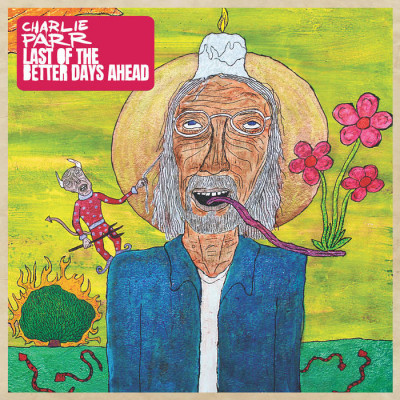 Last of the Better Days Ahead by Charlie Parr

We don’t go too much on this type of thing around here at Echoes and Dust but if you’ve run into Charlie Parr and his music before then you already know he is absolutely the real deal. If not, well, this is folk blues storytelling and self taught guitar at a sublime level. Even if you only pop by here for pointers on extreme metal, you could make room for Charlie. His idiosyncratic picking and clanky resonator slide playing are a joy and his songs breathe vivid life into dusty old forms. Last of the Better Days Ahead is being released by Smithsonian Folkways which seems a hefty stamp of approval and celebration of his achievement, placing him alongside undisputed American greats like Elizabeth Cotten and Woody Guthrie.

It seems like a perfect match but the irony of it is Parr belongs in the Smithsonian precisely because he doesn’t treat the traditions he draws on as museum fodder sealed behind glass. There are truckloads of people doing loosely this sort of thing with an excess reverence or period affectation that drains away its essential life. Parr writes and plays with honesty and verve. A few years back, on 2017’s Dog, he picked up on a song thread of making bold instructions for extravagant funeral arrangements. Detailing his burial suit, band, and flowers in ‘I Ain’t Dead Yet’ but demanding them in this life where he can appreciate them. His official ascent into the nation’s cultural memory feels in that same vein, “Gimme my flowers now.”

That following that album he broke his shoulder blade while skateboarding with his daughter, potentially ending his playing days, also seems illustrative. It’s the sort of mishap that might befall one of his characters. His last album saw him rebuild and regroup, revisiting some older songs in the process and leading to the look back vibe of much of Last of the Better Days Ahead. The lead track does this through the idea of the car as a locus of identity but it’s really about age and regret and the passing of your former self, “were those feelings you remember even real, were they honestly about some junky old Falcon or any other thing that you could own”

The voices in Parr’s songs are everymen, not strictly autobiographical but rarely straying too far from home, adrift in a vast American landscape that slips easily from small details to big questions. On ‘Blues for Whitefish Lake, 1975’ he sets out across a lake into a meditation on memory and loss. ‘On Fading Away’ finds us washing down the Mississippi river with an almost Buddhist calm. On a consistently fine album ‘Everyday Opus’ is a standout. Bleak but beautiful in the grey half light it’s a grim reading of life under the wheel of the machine. Building a portrait from slivers of ordinary detail, wavering between acceptance and defeat, it is human above all.

It’s not all so downbeat, ‘Anaconda’ kicks up its heels and he finds room for a jolt of folksy positivity at ‘817 Oakland Avenue’, a wholesome bumper sticker of a song filled with bright guitar and a message of sharing and caring that might sound overly earnest in lesser hands but feels hard won and moving here. “Can you remember what it’s like when all the world is filled with light? Now do you have that in your sight? Spread it around, do.” That brotherhood of humanity exposes its dark side on ‘Rain’, a bare bones, fundamentals of life rumination that touches on the poisoned water of rustbelt towns like Flint, Michigan, Parr’s circling guitar haunted by moans of upright bass.

A brilliant album, Last of the Better Days Ahead draws on the strengths of an impressive career and still expands the scope of Parr’s music. He finds a way to turn everything up an extra notch. His writing is that bit clearer and sharper and his playing is stunning. Never flash or showy his style is very less is more, on ‘Bed of Wasps’ he pushes that minimalism to the point where it’s just a line to hold the words up.

Across the whole record his guitar feels more focussed and more varied than before, the sparse production allowing it room to breathe. These strands come to glorious fruition on the final track. After all the poetry of his songs ‘Decoration Day’ is a 15 min guitar prayer. Honestly, I know nothing sounds worse on paper than a full quarter hour’s worth of aimless fret noodling but it is just wonderful. Not static and tethered, it is liquid and light, flowing and changing. In its late stages it’s almost like Earth’s blasted desert drone played by a jazz trio. Brooding, meditative, and abstracted, a wander in the wilderness under the falling blue night. Truly Cosmic American music.