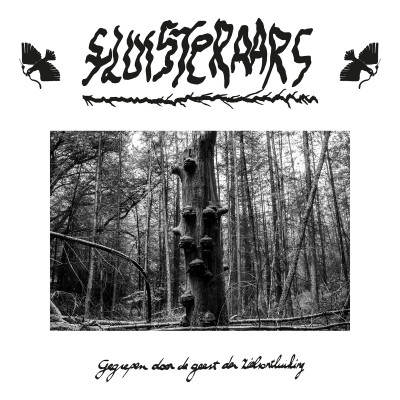 35 minutes of epic but gritty, tightly wound, but flowing black metal are provided in three tracks by Dutch masters Fluisteraars. For those familiar, this will be a satisfying entry into the discography, while they’ll continue to bring in newcomers with this expansive, intense burst of longform black metal exploration. The vocals are hoarse shouts, not the gruffest or growliest or lowest or shriekiest, but certainly expressing an oh-shit-he’s-really-going-to-do-it level of intensity. There’s that wonderful trick of the intensive build, and then the drum halfspeed dropout, so that the riffs, previously vicelike entwined with claustrophobic drumming, are suddenly given space to expand, soar, tower over you, while still propelled at the same rate. On the other hand, they know when to not do that too, making you wait as the pressure is built by long periods of controlled noise.

The start is pretty amazing, a brief rattle of drums and within a couple of seconds the track has already exploded into something enormous, what feels like massed layers of guitar distortion, and highly animated vocals, its like falling through the floor into the midst of a wild hellish subterranean ritual already in full flow. Then things only get better/worse, with unhinged shrieking vocals and a distortion pile-up while the drums and pulsing tremolo ratchet up the tension. Suddenly the whole scene disappears in acrid smoke, leaving a sort of concussed couple of minutes of wisping feedback and percussion clatter at the end.

While sort of an odd anticlimax to the track itself, it leads well into the second track, which again bursts out of the traps snarling. This is maybe my favourite, as it pushes the harmonics a bit more up front, and best exemplifies the band’s skill at changing things to keep them interesting while keeping them the same to build the tension. In addition to the howling growling, in this one there’s some distant-mountain-call vocals which provide a catchy melody while expanding the imaginary space of the track. And here the halfspeed dropout gives rise to a kind of skating kinesis which just keeps everything endlessly in motion, even to the end where the track expires in feedback and tinkling bells.

Finally the third track clocks in at over 20 minutes, but keeps things varied, interesting and coherent with sections of melancholic lone guitar, or clattering drum, clanking noise and feedback, and more introspective sequences, but the track is still built around the duo’s trademark waterfall surge, melding black metal’s tight-grip force with kosmische style motorik relentlessness and sidelong  experimentation. Exhilarating mountain air from the flat country.