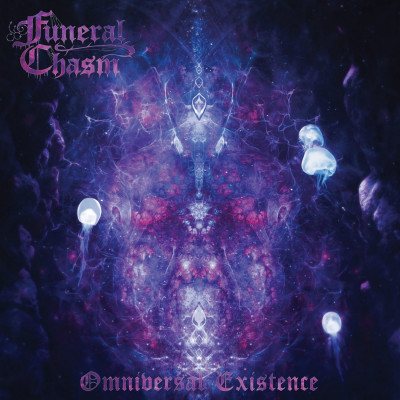 There’s always something exciting about a debut album. No hype, a little trepidation and the possibility that this just might be something completely different to everything you’ve heard before. In the case of Funeral Chasm, the deal is sweetened by the fact that they only formed last year, when Danny Woe and Morten ‘Sjaelepest’ Lund of Above Ravens decided to create something a bit slower, moodier and weirder than their usual fare. Following a quickly-assembled EP, they have seemingly pulled out all the stops for Omniversal Existence, seven (or eight if you head down the vinyl route) tracks of death-doom, funeral doom, prog and psychedelic excursions that strain under the weight of their own ambition yet hold steady throughout.

The first thing that’s clear is that this is truly a work of love and tradition, an homage to only the finest doom that the 90s produced, one hand drenched in sorrow and misery and the other caked in the filth of death and decay. Danny Woe’s voice is definitely doing the heavy lifting on this front as while his growls are guttural in all the right ways, even rising up to more of a blackened screech, it’s the richness of his singing that provides the album’s emotional backbone. There’s a definitive stress on the low, spoken murmur so beloved of Aaron Stainthorpe and his ilk that’s more than sufficient for the more downcast fare but Woe has an impressive range that he isn’t afraid to break out, pushing into a head voice that’s chilling in its clarity.

Sjaelepest has a similar dynamic range in his guitar work, though on the whole it’s a lot more understated. Many of the riffs are downright gorgeous, from the slow, dragged-out wail of ‘Embellishment of Existence’ to ‘The Skeleton Secret’ and its mysterious, lilting air that just seems to drift off into the cosmos, but underpinning it is a reverence for full, cavernous doom that is just so impossibly dense at times that it feels like it blots everything else out. Woe’s keyboard accompaniments do help to embellish the atmosphere when needed, giving the more spaced-out passages something of an eldritch dread that fits their sound perfectly.

If there’s one thing Omniversal Existence does really well, though, it’s subvert expectations. This could have been just another doom record, and it certainly has all the components of albums likely lurking in many collections across the heavy-listening world, but the songwriting is complex, mature and intuitive in a way that many pretenders just don’t get. The flow between sonic extremes is handled with grace, light and shade alike executed with the same earnest aplomb, and even the token vinyl-only bonus track, ‘Through The Eyes of the Joyless’ is ambitious to the extreme, matching up chugging, downtuned weight, bright tremolo, and twilit atmospherics as though they were born to coexist. Funeral Chasm may be a relatively new entity but there’s obviously considerable experience at work here and that, combined with a reverence for the past and a willingness to push past its boundaries, is reason enough to take notice.