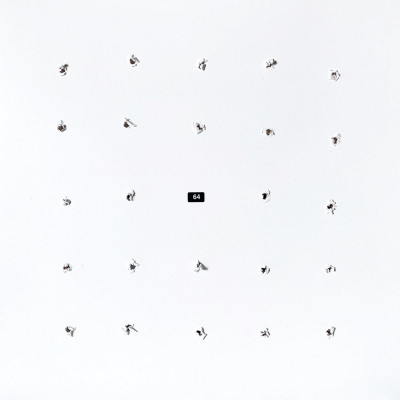 Having spent the past two and a half decades bringing together some of the most interesting, vibrant, and damn well experimental electronic musicians on this here globe, the hand driller for Brighton’s Fat Cat label can finally down tools. While their Split Series was initially intended to last just a few years it expanded far beyond its original remit and, twenty four releases and twenty four years later, successfully ploughed a highly influential furrow courtesy of contributors such as Merzbow, Fennesz, Katie Gately, Matmos, Anthony Child and James Plotkin (among many others). For the final instalment, Fat Cat have corralled the innovative stylings of Ian William Craig & Kago to wrap up this awe-inspiring journey.

The first side of this release comes courtesy of Ian William Craig. It’s a more experimental offering than IWC’s recent output either solo or with Missy Donaldson as Minor Pieces (who seem to be hinting at recordings on the horizon, excitedly). A corrupted loop of Craig’s voice grounds the work with its reliable repetition. Around it all manner of vibrating drones, clicks, scrapes, and buzzing static meander about. A voice appears, offering a heraldic tone. Something light and celestial poking through the din. It sounds like someone scratching around at the bottom of a well, looking for God. The sweet, soaring voices piercing the dirge suggest that a saviour might well have been found but the accompanying drone throb warns that all might not be as it quite appears. It’s as if we’re advised to proceed with caution.

This is followed by snatches of distant voices. Perhaps snippets of an interaction? Dialogue? Or recordings lost? What does it really mean to interact with aged recordings? Ripping through all of this are horror film stabs that ought to fade yet ring on and on. Their sustain sustains our uncertainty. Or, as Peepshow’s Super Hans so succinctly put it: “The longer the note, the more dread.”

Adding to the panic are staccato bursts of what sounds like barely blown pipes. That anchoring vocal loop may well have reappeared but it’s now so mangled that it could be a siren or foghorn left to idle uncontrollably. Swells and rising voices threaten to come to the fore. There’s a chirpy delivery to the desperate puffs, like a murmuration of disturbed starlings.

Craig’s vocal manipulations are then joined by searing static and faint piano tinkles. It’s a resolute journey. One of self-cleansing, purging. A deep expression of self that is encoded for the few, not the many. To reach the beautiful coda of his sung voice, you must earn the right. You must experience the valleys to appreciate the peaks.

The second half sees Estonian vocalist and odd-folk connoisseur, Kago, emerge from the rotating grooves. Here is another artist whose use of voice is both intrinsic to their work and also a source of fascinating experimentation. He takes a similar palette but approaches it differently. ‘Tetermats 2’, for example, is rife with tape manipulation. Rather than simply layering and looping, the tape recorder is manipulated playfully – played, rewound, sped up – the button presses themselves forming a percussive through-line whilst Kago’s 4 year old daughter makes an appearance, their duet dancing joyously atop this mechanical foundation.

The innovative approaches don’t end there. ‘Leontiine Kirotosk’ is formed from a glitch of burbling electronics that sound as if they were drawn out from under water and the accompanying processed bottle strikes give it the feel of a twee animated video game’s score with a potentially serious undercurrent to the narrative. Similarly the wash of field recordings, snatched voices and softly pumped organ that make up ‘Avovang’ hint at a sense of place binding this together and the beautifully resonant earthy pipes of ‘Suure Reede Lapsed’ only highlight this further. Whilst they’re occasionally saxophonic in their squeals, the soothing voice, sometimes solo, sometimes accompanied by others, is always deeply grounded.

That notion becomes even clearer on ‘Käed Lahti On Ulga Kergem Sõita’ in which plucked notes ding out from tightly wound rings or found metal objects. It’s as if it has been created by and from the objects littering a landscape. A handsaw here, a milk bottle there, a recording of a nearby stream. There’s a sense that the mundane is very much a cause for wonder. More so than any pretences to grandeur. The backdrop for life is musical splendour.

An effervescent twirling of instruments, on the finale, recalls the Penguin Cafe Orchestra at their most sincere or Bibio at his bucolic best. It’s a burst of life, a celebration of hope and all in just under 2 magical minutes. And, whilst this is a wondrous piece, it isn’t even Kago’s finest moment. That, I would say, appears at the opposite end of Kago’s half of the split – side 2 opener ‘Kröösnomi’. A Seto call and response created via Kago’s technique of dictaphone shamanism and wrapped up in what sounds like either the grunts of farm animals or the gentle firing of a chainsaw amidst creaking swings and gentle ambient pads. Not only is it a fantastic ear worm but also my favourite misheard lyric of this year (courtesy of my partner): “Fix your horse, sell it here”.

All in all, this final collaboration is a wondrous way to round off the majestic Split Series from Fat Cat. The Split Series is dead, long live Fat Cat.