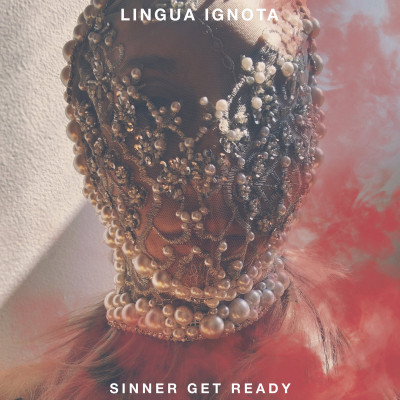 SINNER GET READY by Lingua Ignota

Welcome friends, is this your first time in our congregation? On SINNER GET READY Lingua Ignota‘s ongoing exploration of religion as a reckoning with human abjection finds us all sweating in church. I don’t think it was a deliberate artistic choice but Kristin Hayter now lives in Pennsylvania, in a landscape marked by an austere puritanism well attuned to her meditations on transgression and judgement. The poetry of its arcane language informs these songs, mixing with folklore and personal pain to stunning and revelatory effect. And when Sister Kristin gets up to testify, she shakes the walls of the damn chapel.

It’s intense in here, claustrophobic, but you knew that already when you walked in, right? Appalachia makes itself known sonically too, the harsh industrial tones and extreme metal elements are gone, dread and drama called up now by piano, voice and traditional stringed instruments, there’s even some particularly desolate banjo. The first couple of tunes released ahead of the album are largely built around slow piano and Hayter’s stunning, sorrowful voice. ‘PENNSYLVANIA FURNACE’ introduces key themes of rage and judgement, drawing on the story of an 18th century ironmaster who, in wild fury, threw his dogs into the fiery furnace only to have them return and drag to him to hell.

Do you feel the fires of hell, sinner? ‘PERPETUAL FLAME OF CENTRALIA’ conflates a long abandoned Pennsylvanian mining town, where fire has been burning underground since 1962, and with the very fires of hell itself. It dwells on the purifying blood of Jesus, a visceral image of redemption through sacrifice beloved of more apocalyptic strains of Christianity and central to the album. It also finds time for the blood chilling line “Mine is the venom of the snake of Eden” and the resonant but unknowable proclamation “Life is a song”. This vast sweep all carried on a soft stream of piano and resigned vocal lamentation.

The album begins with a buzzing, ominous, hum and some gospel piano, a sense of expectation. But when the choir comes in they wail in disarray. As an opening line “Hide your children, hide your husband” hangs between worried and worrying, the mood is woeful. About half way in the piano thunders as if hurled from the heavens into the roof such is the discordant force of its sound. Funeral chapel organ wells up on ‘I WHO BEND THE TALL GRASSES’ carrying raw confession and cries of murderous vengeance in language most unchristian. It’s perhaps the vocal that most leans back to CALIGULA contrasting with the new sound world of ‘MANY HANDS’ folk drone beset by clanking field tool rhythms, a dread choir and guitars played with a blade or beaten with a log. Featuring the titular admonition to prepare your soul, it’s a close, suffocating thing, drenched in fear of damnation.

This is Amish country and the album’s tendency to also cast itself a century or more in the past shrouds the bleak ‘REPENT NOW CONFESS NOW’. A cold, unforgiving lament that seeks redemption through mortification, confession as punishment beating. Elsewhere the vulgar descendants of such severe creeds pitch up in the sampled voices of disgraced TV preacher Jimmy Swaggart, theatrically admitting his failures, and the prostitute who exposed him breezily doubting his sincerity. Her words begin ‘MAN IS LIKE A SPRING FLOWER’ which draws on Mennonite writings for poetic images that sketch the unknowable complexity of the human heart. Quite unexpectedly it picks up into a bright second half that recalls Michael Nyman in its blend of fidgety propulsion and stately melody. It seems that perhaps we find some succour here but it ends with a distorting rise in volume that abruptly cuts out.

Are you washed in the blood? A final sample of a woman taking ugly combative certainty in the protection offered by her saviour’s blood shines a stark light on the conflicts of faith. That rejection of this world, leaning on the promise of peace and rest in the next life flows into our closing prayer. ‘THE SOLITARY BRETHREN OF EPHRATA’ takes its name from a self isolated, ascetic, religious community, what we would these days regard as a cult. After all the fear and trembling the song is soft and beautiful, a dark dream of transcendence, a consoling hymn of hope for eternity, “paradise is mine”.

These are not lightweight considerations, SINNER GET READY is an existential confrontation with human wretchedness and mortality. Balancing religious constructions of good and evil against lived experience it doesn’t take an easy path but lives in doubt and conflict and fear. Threaded with vulnerability and contrary impulses the songs are impressively realised. Hayter’s academic, classical background providing a rigour and flexibility that perfectly frames the raw intensity of emotion. It’s an overwhelming piece of work, you can’t push it into the background, you don’t want it on repeat. It’s a fight for your very soul. So, obviously, it’s not for everybody but if there were any lingering doubts about her status as an artist you can set them aside. Moving on from CALIGULA it grows and changes her approach but arrives at an extraordinary statement equal to that album’s dark power. Terrifying and beautiful.