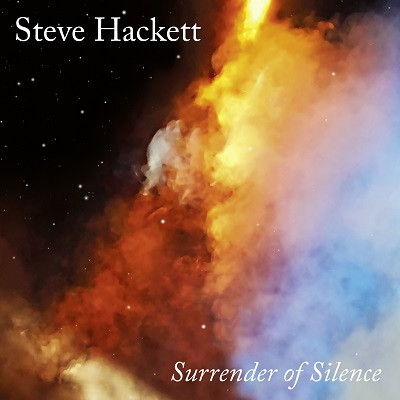 Surrender of Silence by Steve Hackett

2020 was the year that everything came to a screeching halt back in March. While everyone was in lockdown due to the pandemic and the spread of COVID-19, it became a virtual landscape. From virtual comic-cons, autograph signings on Instagram, and of course plenty of albums recorded during these tricky times. But for Steve Hackett, he has shown no sign of giving up during the lockdown.

With 26 solo albums in the can since 1974’s Voyage of the Acolyte, it shows that Steve is more than just a member of the original line-up with Genesis from 1971 to 1977. While his previous album Under a Mediterranean Sky was his first acoustic release since 2008’s Tribute, Hackett has gone back to those brutal textures of a symphonic voyage into the unknown. His 27th studio release from the InsideOut label entitled Surrender of Silence, sees more of a return to an electrical form. Recorded during the lockdown, Steve himself can still pack a punch like no other. But at times, he is like the mad scientist on his new album.

The three pieces; ‘The Obliterari’, ‘Natalia’, and the reprise of ‘Fox’s Tango’, goes into a power metal route honouring the textures from Blind Guardian. It is like an operatic illustrated film brought to life. Starting off with these tapping frets by going from one location to another, it has these Indian percussion tribes with its Stravnisky-sque vibe channeling the ‘Rite of Spring’.

As the lava rises comes out of the volcano, it transforms into a Tim Burton-sque atmosphere thanks to the Camille Saint-Saëns section with a dooming waltz on the ‘Danse Macabre’. As the Russian choir rises, it deals with a Joan of Arc-sque characterization that Hackett narrates the story of a woman who wanted to be loved, but pays the ultimate price from its alarming tolling bells and siren-sque guitars.

The reprise is Steve coming back with more blood and guts. Brutal organ work, and compositions building up, you can tell that Arjen Lucassen has another idea for the next Ayreon project when he listens to this. Plus some Queen-sque vibes that Hackett brings to the kitchen table for the finale of the Tango. ‘Shanghai To Samarkand’ is a trip from the Yangtze Estuary to a city in Uzbekistan on the silk road with its ancient trades and known for its mosques mausoleums. Tuvan throat singing and its bloody aftermath, it becomes a tidal waving battle that Hackett and Ehart handle the destruction on what is to come at the end of the album.

‘Wingbeats’ has been a dividing line in the sand when the video appeared on YouTube on July 2nd. For me, it’s a tribute to Peter Gabriel’s 1978 third studio album (Melt), and the WOMAD festival that would have audience stand on their feet to sing along with the appreciation of world music. Epic-like surrounding landscapes, the nod to Ladysmith Black Mambazo’s choral sequence, you have to give Durga and Lorlei McBroom a huge amount of credit going into this Gospel-like vocalisation to view the atmosphere and landscapes around the heart of Africa. ‘The Devil’s Cathedral’ starts off with the first minute and twenty-one second introduction with King’s church organ going into a heavier tone with Rob Townsend’s wild sax improvisation.

It channels not only ELP’s ‘The Three Fates’ but the dooming nightmare from Jacula’s 1972 second release, Tardo Pede in Magiam Versus. Then the rhythm section kicks in for Nad Sylvan’s story on how making a deal with Satan can hit you like a ton of bricks. Steve then goes for a helicopter ride with the classic line-up of Genesis channeling the guitar break on ‘Dancing with the Moonlit Knight’ by making it a dance with death.

Now that ‘Scorched Earth’ is set in this post-apocalyptic scenery, Steve’s instrument cries into the next chapter of the book on what is going to happen next in tomorrow’s dream as ‘Esperanza’ becomes the final resting place for the Hierophant as Steve returns to the Acolyte one last time before returning back to Earth.