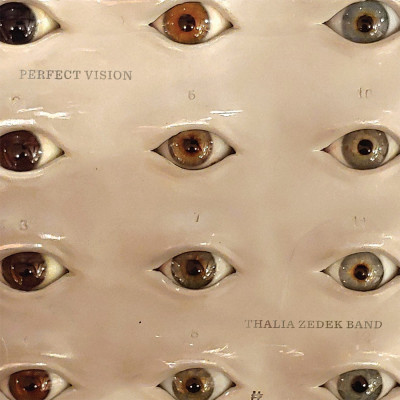 Displayed in a grid, twelve glass eyes gaze out unsettlingly from the cover of Perfect Vision. Glistening and sightless, a comforting deception, the appearance of normality in the place of loss. They may look perfect but they lack any vision. The title and image are a sardonic reflection of the album’s themes, there’s little utopianism togetherness to be found here. Finished on January 6th as insurgents stormed the US Capitol, Perfect Vision finds Thalia Zedek addressing the anxieties and divisions of recent years that fed into that event and continue to inform our feverish pandemic reality in 2021.

There’s plenty of confusion and disappointment, it may even be angrier than the last album, Fighting Season. First up ‘Cranes’ surveys the wasteland left by the last presidency in stark terms “The pride of a nation has been erased, drowned in waves of shame”, although the general tone is more lament than rage. Contrasting its grim mood what you first notice is Karen Sarkisian’s bright pedal steel lifting the track. It’s a wonderful addition, Zedek’s music has featured bluesy slide before but never anything so country. Possibly it even reflects the lyric, country music is like an estranged cousin to Zedek’s, sharing some instrumentation and themes, occasionally waving from the far side of Americana, a different world.

It would have been nice to hear more of Sarkisian but it’s just that one track. Perfect Vision may prove to be a transitional album for the band although that’s partly obscured by lockdown necessity. The bulk of it was recorded as a trio with long term bass man Winston Braman and E bandmate Gavin McCarthy coming in on drums, Zedek’s guitar is unfussy, forming a backbone to the songs. Their playing is fluent and accommodating, leaving space for other voices. Space that’s usually filled by Mel Lederman’s piano and David Michael Curry’s viola but there’s much less from both this time. Lederman only appears on ‘Binoculars’, a churning “sea of lies” that spies apocalypse on the darkening horizon. Curry’s contributions I think were recorded remotely and feel much less forthright. He’s also subsequently left the band. Alison Chesley (Helen Money) makes a couple of perfectly judged guest appearances playing cello and piano on the charming, waltzing ‘Smoked’ and on closing track ‘Tolls’.

The centre of the record really turns over the disheartening state of things and our widespread loss of trust. ‘Overblown’ is a mid paced lament for the unhelpful polarity of online discourse. Zedek’s frustration with mean spirited rigidity boiling over in ‘Queasy’, “I’m so tired, of this endless stream of filth”, it’s a charging coat down for bullshitters. ‘From the Fire’ faces a lack of options with an edge of panic, but is elevated by some great trumpet swaying in from Brian Carpenter. With nowhere to turn ‘The Plan’ dreams of an escape while also painting the album’s bleakest picture yet “Everybody’s got a plan for how they’ll save their lives, or how they’ll suicide…”

After all that end times worry the last three songs turn to more personal relationships, ‘Revelation Time’ is not the Biblical apocalypse but someone showing you who they are in a way that changes things between you. Open hearted, it’s probably the album’s brightest moment, a different kind of confusion and disappointment to earlier. ‘Remain’ feels cold as it wanders alone down the beach, cymbals splashing like waves on the shore, but seems to relay a steadfast devotion. Lastly ‘Tolls’ considers the price exacted by time and poor choices on an old friend or lover, or possibly even America, returning to the album’s main theme. It’s not a pretty picture and it points down the road to hell. The musical storm finally breaks and Zedek’s guitar comes noisily to the fore, it’s fantastic.

The understated brilliance of the musicianship throughout only reveals itself slowly, the move away from the band that produced the remarkable last three albums unfolding successfully and opening new possibilities. Perfect Vision doesn’t feel like the kind of record to win a whole raft of new fans, a grim assessment of the current state of things, it may be a bit stark for that, but we really shouldn’t take her continuing greatness for granted.