(((O))) Review: Witchcryer – When Their Gods Come For You 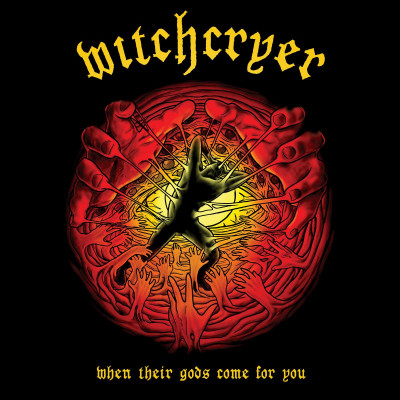 When Their Gods Come For You by Witchcryer

Holy shit in a handbag! Austin, Texas has got something mind-blowing up their sleeves in the doom metal approach. That band of course is Witchcryer. Formed in 2015 by guitarist Jason Muxlow around the time he was with his previous band, Earthen Grave. He moved from Chicago to the Lone Star State as he started to co-write songs with drummer Jaci Moctezuma and vocalist Suzy Bravo.

They released their 2016 demo, The Preying Kind to amazing reviews. As bassist Marilyn Monroe (no, not the actress, but a different name) joined in, they were an official band. Three years ago, they released their debut album entitled Cry Witch and received acclaim from Pure Grain Audio, Fuzzheavy, Angry Metal Guy, and Negalithic. This year, Witchcryer are back once more with the release of their second album, When Their Gods Come For You.

Released on the Ripple Music label, it’s a conceptual album about gods across various ages of civilization throughout time and space. For Suzy, it was a dream come true for her to write stories like this. You can imagine her writing these visions she had for the adult illustrated fantasy magazine, Heavy Metal. So if you’re expecting something from the Marvel comics or the cinematic universe, guess what? You got the wrong imaginative movie that is brought to life.

There are aspects from not just Black Sabbath, but from Candlemass, the Lemmy-era of Hawkwind, Motorpsycho, Hedvig Mollestad Trio, and Elephant9’s collaboration with guitarist Reine Fiske (Silver Mountain and Atlantis). And some of the centerpieces that are on this album, is the ultimate trip we’ve been waiting for.

From the moment you listen to ‘Blackfoot Creation Story – Spirit Power’, Suzy channels the spoken dialog of stories from Hawkwind’s Robert Calvert and Van der Graaf’s Peter Hammill while Jason lays down the law with some heavy riffs, entering the caves with Suzy bringing her theatrical visions of what is happening throughout the story. There are some ominous tribal calls as if they’re doing a darker version of Laura Veirs’ ‘Icebound Stream’ that Suzy sings in the style of. Eruptive tidal waving effect from Jason, Marilyn, and Jaci, the guitars goes into a striking effect to get the temperature levels boiling for Marilyn’s bass to set up the last 2 minutes and 44 seconds. ‘Sisyphus (Holy Roller)’ sees Marilyn’s bass bringing out heavy punches for Jason doing his bluesy riffs on his instrument.

Channeling the late great Ronnie James Dio, the band are tipping their hats to the Man on the Silver Mountain before descending into the finale of Aerosmith’s ‘Dream On’ as they revved up for a finale with storms passing through as Suzy reveals her true power to give that thunderous vibration at the end. ‘Hellmouth’ features both a beast-like guitar introduction and dooming fuzz tone bass lines.

Not only Jason is honoring both Hedvig Mollestad and Reine Fiske, but is raising terror throughout this quiet little town that is getting a huge alarming wake-up call with some Sabbath Bloody Sabbath-era compositions while ‘I Rise!’ we head into the battlefield. Footstomping bass drums and militant drum work with some growling guitars and bass featuring a cackling laugh and the bloody scenario of the aftermath. This ain’t no Braveheart, folks! Not to mention Marilyn honoring the late great John “The Ox” Entwistle on his bass for a little while.

‘Nemesis, The Destroyer’ is the calm after the storm. Witchcryer meets the killer of all killers in this song. Marilyn at times plays like a jazz musician when he does incredible fret lines on his bass guitar while Suzy takes listeners into the acoustic swampy rivers into the Mississippi Delta. She not only has a soulful arrangement in her vocal lines, but Jason does some Brian May-esque textures for a chance of retribution.

Witchcryer aren’t just the real deal, they’ve poured their hearts and soul unleashing their second album. With many of the Texas metal and prog bands to keep an eye out for including; Proud Peasant, Worhol, The Aaron Clift Experiment, Oceans of Slumber, and Edge of Paradise, Witchcryer are going to be added for those watched-out bands to be on the look-out for in the roaring ‘20s.