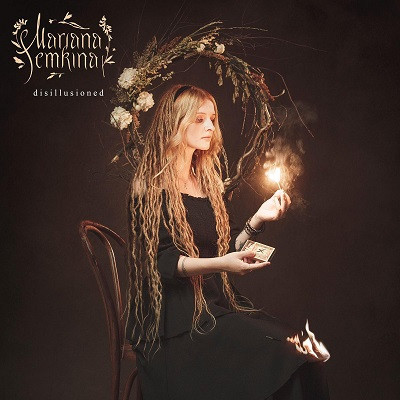 It’s been a year since Iamthemorning’s Mariana Semkina released her solo debut album Sleepwalking on the Kscope label along with the self-released EP from the duo entitled Counting the Ghosts. We can imagine right now that they’re working on a follow-up to The Bell and we hope it is worth the wait from their 2019 release. This year, Mariana has released her new EP entitled Disillusioned.

Featuring three original songs and two covers sung in Icelandic and Hungarian, Mariana’s vocals fill the cathedral halls to bring a warm, sun-lighting glimpse of an eternal choir of bringing joy and happiness throughout the pandemic. Inspired from the Victorian-era of poets raging from William Rossetti, Elizabeth Siddal, and Christina Rossetti, Disillusioned is like an extended story arc of the main characters from Iamthemorning’s operatic conceptual gem, Lighthouse.

Recorded remotely across Canada, Russia, and the United Kingdom, Mariana is quite the storyteller from beginning to end. With its eerie introduction, ‘Friend’ has these ambient sequences from Grigoriy Losenkov channeling the Irrlicht-era by Klaus Schulze.

Featuring these orchestral organ sounds, it is almost receiving a lost letter from a friend that you received many, many years later. And for Mariana, you can almost imagine her reading the lost note. We have this vision of her fighting back tears with its calming lukewarm acoustic textures from Vlad Avy and intensive string sections to add more fuel to the fire.

The Bela Bartok composition, ‘Ne hagyl itt!’ translates to ‘Do not leave me alone!’ is a lyrical setting in a mournful atmosphere of double-tracking vocals for Mariana saying goodbye to their loved ones as the title-track is a tip of the hat momentum for her to both Steven Wilson’s Insurgentes and Tool’s Lateralus-era. But it’s the fantasy lullaby of the Jóhannes úr Kötlum’s poetry, ‘Land Míns Föður (My Father’s Land)’ that is a call of the sea.

Mariana is standing on the mountains singing in the styles of ‘I Came Before the Water’ during a heavy thunderstorm with its gentle arrangements as the curtains come down for the final composition of ‘An End’. We see Avy channeling the textures of David Gilmour and its futuristic chamber organization are passages of time to see where the 22nd century will head into next.

It becomes a subject to move forwards and never looking back as the last half of the piece goes into a walking groove by going towards an opened door, not knowing what is beyond that light at the end of the tunnel. Disillusioned is Mariana’s imaginative movie brought to life on the silver screen.

I always imagine those songs and poetry being made as these short animated films that go beyond the Disney route and bringing the subjects over the loss of innocence to us and how we can cope over losing a loved one. For Mariana, the stories have only just begun.