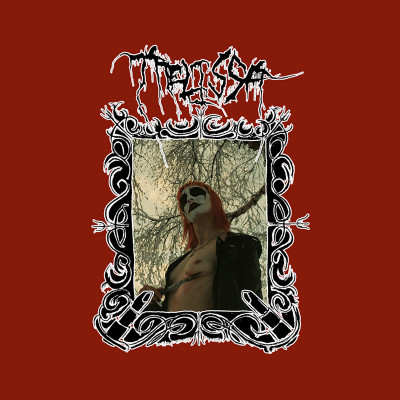 I’m not generally a fan of black metal or death metal, generally, I’m not a fan of any genre when people basically just ape what other people are playing. However, this bizarre, imposing, foursome have managed to drag me into it, a feat which has only ever been previously achieved by Oathbreaker and Oranssi Pazuzu. After my band Burden Limbs unveiled a new song entitled ‘Flesh Prison’, my brother sent me a record label called Flesh Prison Records which focuses on the gnarly underbelly of the queer music scene. I fell in love with the label immediately and the band that really caught my attention was Melissa. If you like those two aforementioned bands (Oathbreak and Oranssi Pazuzu), you’ll love this but, realistically, musically, Melissa is on a different playing field two of those. Where Oathbreaker is often choppy and frenetic and trebly, Melissa is pummelling and relentless and dominant. It’s probably somewhere between Oranssi Pazuzu and GNOD. Huge riffs, heavy drums and well-executed repetition with a whole lot of bass.

Since initially writing this review, Melissa and their frontperson Jane Pain, have parted ways with their former record label, Flesh Prison records, due to issues detailed in an article entitled What is Happening At Flesh Prison Records?  over at Harsh Truths Podcast (never heard of these guys so, can’t really weigh in on any of it). However, I still really want to get the word out about this release and to also provide a way for any fans who discovered the band like I did to reconnect with their music via their own official Bandcamp which, given their name and the fact that it is a self-titled release, is quite tricky to find on a cursory Google search so, that is embedded in this review for all to see and apparently, the best way to follow them online is to either follow that Bandcamp or follow @jane_____pain on Instagram.

Following a brief dark ambient-intro and a piercing shriek “Breonna” kicks things off with a band playing what sounds to be one giant chainsaw made out of three instruments. Jane Pain’s vocals are some of the only black/death (whatever the fuck it is) vocals that I can actually enjoy. It seems to be a fairly common feedback for the band that people who don’t usually like these kind of shrieking/squealing screaming techniques still enjoy them. I think the vocals have just the right balance of raw expressionism to balance out the theatricality of the style. The main thing is that, everyone I’ve shown this album to so far, thought it was fucking amazing and so do I and so do all the comments I’ve seen on socials and YouTube. So, they’re doing something right.

I love how seamlessly ‘Jennifer’ segues in, the production on this album is fantastic but, the sequencing (as always!) is a really important part of that because it just feels like Melissa drag you into their world and hold you there, pinned down with chains and hooks… The riffs are all absolute face-melting, shredders from Hell on both bass and guitar…and the drummer is an absolute machine. The tremolo on this track is both sinister and euphonic. I would love to see this band live, I bet they would be extremely unhinged and to hear more material would be amazing. This release is absolute gold for me.

‘Jacob’ takes things in a more choppy direction, I really like the swagger of the vocals in this track and the mixing of the different layers. I would actually love it if they included sections with singing and vocal melodies and choruses because it would give the band greater diversity of sound and everyone loves a catchy vocal melody or chorus. It could be Slipknot-esque where it’s mostly screaming with sang hooks or just actual songs that build to screaming. Slow jams. Ambient stuff. This band could do anything. As it stands though, the ending of this track is amazingly heavy, I love the rapture they build with the double-pedals and just the relentlessness of it. They’re fucking incredible

The final track on the album is ‘Christopher’ and it’s one of my favourite pieces of music I’ve heard in a long time. The charging rhythm of the track sounds like rolling thunder burning through my speakers, somewhere between Black Sabbath’s ‘Children of The Grave’ and GNOD’s ‘Bodies For Money’ its part-metal, part-crust and for me it seems to perfectly fuse basically I like about Melissa together. The track is just over four minutes of every member of this band slamming the listener over the head with their instruments and that is exactly what I want from my music. Something that finds all of the synapses in my brain that carry information and thoughts and ideas and crushes them under the weight of the sound. Something that switches my mind off and turns my ears on. This album is around fifteen minutes of absolutely unhinged, head-slamming excellence and is undoubtedly one of my favourite releases of the year.