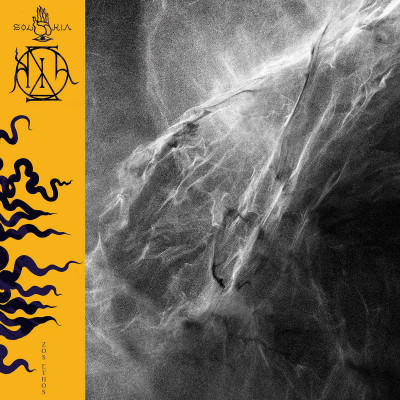 I, Voidhanger have once again peeled back the layers of reality and reached into the void to pull out another mind-bending band ready to blow your souls away. Sol Kia are the Belgian duo of Stephane Van Tricht on vocals and multi-instrumentalist Guillaume CZLT of barbaric black metallers Ôros Kaù and psychedelic free jazz collective Neptunian Maximalism.

Sol Kia are one of those special kind of bands that come along once in a while to challenge art and the listener’s perceptions of the genre. Part black metal, part experimental fuckery and part psychedelic trip into the dark spaces of your mind. Listening to their debut album Zos Ethos is akin to running through a graveyard blindfolded on mushrooms with an active thermite grenade clenched between your teeth.

Opener ‘Sulfur’ tears wide the hellgate and unleashes a vicious cacophony of twisted noise and eerily delicate blastbeats amid a nightmare-scape of interdimensional horrors. Whispers, rasps, cleans and ghastly calls from another world break through the Mories-esque maelstrom of dark and abyssal sounds. The epic doom piece ‘Mithraeum’ changes things up with an intro of proggy psychedelia with its lumbering drum patterns and slow, drawn out guitars leading you on a trippy journey into a more guttural jab of energetic blackened metal.

‘Hoathahe Saitan!’ is the album highlight. It’s an evil beast wrapped in blackness with more than enough hooks to drag you through its warped cosmic darkness. Vocals are terrifying and showcase an impressive range, from warbling gollum to Candyman growls. Blastbeats hit like endless stab wounds in the meat of a sacrificial goat and the synthy atmospherics and tremolo shredding act as a perfect backdrop of eeriness.

Ending the album is the lengthy ‘Kosmik Katatonik Korpse’ and, if you’ll ignore the hopefully unintentional capitalising, it’s an accomplished track, super restrained and has a soundtrack-esque feel. In fact, it’s utterly mesmeric, haunting and strangley beguiling with its vintage feel, dissonant noise and blackened hair metal squeals resonating throughout the track.

Blastbeats on Zos Ethos are restrained and delicately soft, similar to furiously punching a pillow on an uncomfortable night, but don’t let that statement detract from their impact. Production-wise the drums could be seen as lost in the mix, but this suits this kind of music, though it would be great to have them stand out more.

The album and I feel Sol Kia’s ethos are more about generating soul-piercing cacophonous soundscapes and dripping, black realms of fear and they do that with great success. Zos Ethos is wild, rabid and untethered black metal ready to drag your soul through the blazing flames of existence.