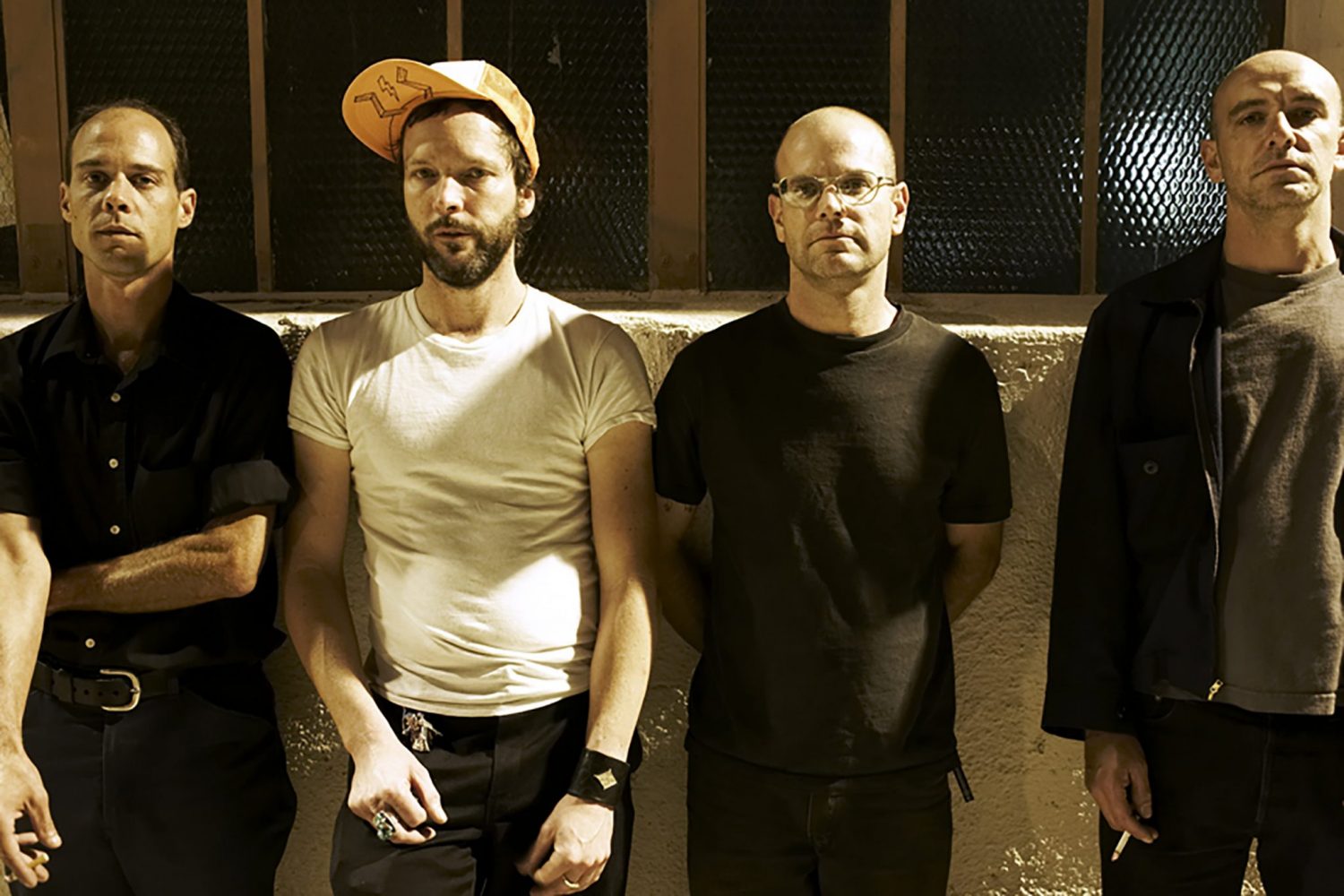 Human Worth are extremely proud to present a special 15th Anniversary re-issue of Enablers’ seminal 2006 album Output Negative Space, with a portion of proceeds going to music and mental health charity Sounds of Saving

To celebrate the re-issue, Human Worth have commissioned two videos, directed by the multi-talented Gareth Thomas (USA Nails / Cower / Silent Front). Our premiere is the album’s opening track ‘Five O’Clock, Sundays’ uses re-discovered and previously unseen footage of the band from the Output era, mixed in with visuals linking with the theme of liquid – representing Andy’s (the main character of the song) increasing intoxication.

Poet and frontman, Pete Simonelli, writes: “The ‘Andy’ in the song is/was a real guy. No idea if he’s still among us. I’d honestly doubt it. He lived pretty hard. For a time he was a regular at a bar I worked at in the late 90s. He was a ‘percussionist in Cumbia bands’ he’d get kicked out of all the time, and used to pound out highly irregular beats on the bar (;What’s that time!? WHAT’S THAT TIME, DAWG!?’); drove everyone crazy. I wasn’t the only bartender who tossed him for it on several occasions. One of only two people I’ve ever heard was canned from UPS. Much of what is written in the poem is drawn from actual events, i.e. entering the bar on Sunday afternoons (thus the title of the track) during (American) football season to play on everybody’s cheer and score a few free beers etc. A nice and pretty funny guy, Andy, when sober (aren’t they all), just a pain in the ass more often than not. Always involved in more scrapes than any single person could ever handle, and a drunk-at-noon kind of character. He’d forget to wear his dentures quite a bit but had great hair and was quite a charmer with the ladies. Until he wasn’t. (See above.) Many people have second-hand stories about their ‘crazy uncle’. He was that guy. That’s pretty much the approach I took in writing the poem.”

Guitarist, Joe Goldring, explains the context of the footage: “The sped-up stuff is from Byrnes’ birthday party at my Auntie Pat’s house in London at the end of our first real Tour. Later that night me and my girlfriend started driving the pumpkin (Our friend’s old orange German works van) that we were touring in back to Budapest. Highly efficient tour logistics. The boat stuff is our first ferry crossing to the UK. Probably first post mushy peas experience judging by the energy level. How I miss touring.”

Videographer, Gareth Thomas, writes: “The movement in this song is so fluid and elegant, so I wanted to reflect that in the video. I was lucky to have been given some private footage shot by the band from around the time the record was released to integrate too so, there’s a bunch of stuff in there that’s never been seen before. It was a pretty daunting task to put this all together, given how well loved Enablers are, but I’m really pleased with how it all came out and stoked that I got to work with them on it.”

The definition of a cult album, Output Negative Space is as heartfelt as it comes. In just over half an hour, Enablers twist and turn through the sprawling intricate guitars of Joe Goldring (Ex-Swans) and Kevin Thomson that glide elegantly before bursting into controlled explosions of sound. These guitars dance around the dreamlike poetry of vocalist Pete Simonelli, backed by the herding, jazzy percussion of Joe Byrnes, who sadly passed away in 2012.
With Output Negative Space reaching it’s 15th anniversary, as well as nearing the 10th anniversary of Joe Byrnes’ passing, UK based DIY label Human Worth have lovingly remastered Output Negative Space for vinyl for the first time, pressing up a limited edition run of heavyweight 180g vinyl, packaged in a stunning gatefold sleeve designed by David Hand (Lancashire & Somerset) which includes a hand numbered booklet featuring writings by Pete Simonelli and friends of the band remembering drummer Joey Byrnes 10 years after his passing, accompanied by rare tour photography by Owen Richards.
In homage to Joe Byrnes, 10% of proceeds from sales will be donated to charity Sounds of Saving, who aim to improve mental health and reduce suicide rates by celebrating the power of human connection to music and directing people to the resources they need before it’s too late.
Output Negative Space is released on November 19 and can be pre-ordered here.