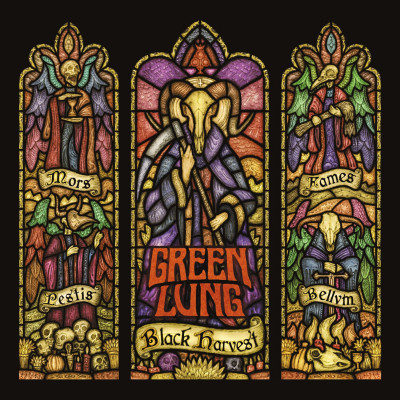 For those who feel it is the metal dominated by dark, angry, aggressive, and throat-ripping stylised music that has attracted the most attention recently, there are signs that a few young bands, inspired by metal’s formative years, are bringing their own fresh qualitative take to the heavy scene. London-based Green Lung are one of those spearheading a taste for conjuring big tunes and riffs with clean vocals for maximum earworm punchiness.The idea of the band was formed at Desertfest, and with a love of Black Sabbath, and British folk horror films like The Wicker Man, they quickly created classic metal-inspired tunage combined with occult lyrical themes for their excellent debut album Woodland Rites.

While Green Lung are mostly associated with the doom and stoner rock scene, their sound is more nuanced, as it incorporates other styles alongside stoner and doom – hard rock, classic rock, classic etal and even a smattering of prog is cast in their musical spell. Amazingly, right from the off they have cemented a distinctive sound, which is enhanced enormously by Tom Templar’s Ozzy Osbourne-tinged clean melodic vocals.

So, why change the formula? Black Harvest is the sound of a band puffing their chests out loud, proud and riding on an incredible elevated confidence. It’s not often you find a modern metal band grace the pages of The Guardian, but that’s where Green Lung have recently found themselves, coming on the back of glowing reviews from their recent Bloodstock performance, which isn’t a surprise if you have had the privilege to have seen them live.

Black Harvest has more bangers than Mattessons, and many here will proudly sit among Woodland Rites standouts. The energetic chugger of ‘Leaders of the Blind’ with Don Airey stylised organ riffery and a chorus that will encourage mighty singalongs. The opening guitar interplay on ‘Reaper’s Scythe’ draws you in before another galloping, punching-the-sky belter. While ‘Upon the Altar’ is a tidal wave of shooting- from-the-hip riffage built around high quality song-writing.

They have released four tasters prior to release, and except for two instrumentals, which complement the album really well, they could  have just picked any of the songs out of a witch’s hat. ‘You Bear the Mark’ with John Wright’s glorious organ solo and Scott Masson’s soaring guitar are delightful, while never sounding showboating. And ‘Doomsayer’ will be one of those album track belters, with its robust mid-tempo swagger and another rousing chorus perfect for the live stage. The only close to a misfire the album gets is the Ozzy-tinged ballad ‘Born to a Dying World.’ It’s a bit too ‘get the lighters out’ for this reviewer’s liking.

That aside, Black Harvest is full of great, smouldering, infectious songs; metal anthems built for stadiums. And, remarkably, it sounds like the band have just delivered it all within their stride and with a knowing wink-and-a-smile confidence that this rocks! As Tom sings, ”Reap what you sow”. Green Lung have magnificently planted the seeds, now it’s over to us help them reap the rewards this album so richly deserves.