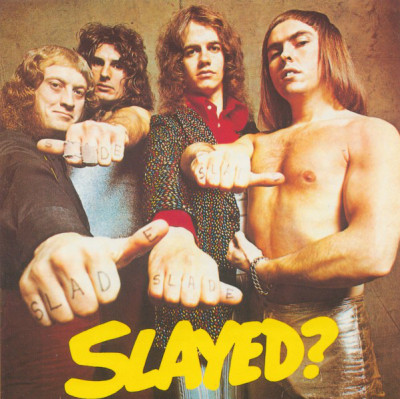 Slayed? was the band’s third album and it went straight in at Number 1 when released that November and remained in the charts for 34 weeks. Of course at the time Slade strode across Europe like a tartan-trousered Godzilla, blasting out hit singles and albums like the giant reptile’s fiery breath after a particularly heavy night on the sake. And yet despite Slayed? being just one of three chart-topping albums, and the band being a cherished institution for any rock fan over a certain age, you’ll never see any of their studio album’s listed in Top 100 Best Of’s… so beloved of the music press. My teenage son is familiar with the works of Nirvana and Led Zeppelin, but he’d never heard of Slade and the only tune he seemed to recognise was the Christmas single. I’m sure many a keen young rock fan has been lead to Spotify to check out the ‘canon’ of albums; Led Zep IV, Exile on Main Street, Nevermind, The White Album, Back in Black etc etc. – but it’s unlikely many have been encouraged to check out Slade’s back catalogue by their peers. Why is that? Well, I suspect it’s partly that Slade made, maintained and even resurrected their reputation as a live act. Slade were the good time had by all. The original album liner notes on the back by music journo states as much…

Also main songwriter Jim Lea had a genius for penning catchy melodies to the extent that virtually every song the band put out in the early seventies could have been a Top 40 smash. As a consequence the band’s studio albums can feel like single collections or slightly cleaned up documents of what the band were playing live at the time. That’s certainly the case with Slayed? which by the end abandons any pretence of being a self-contained piece of art and barrels out with a medley of ‘Let the Good Times Roll/Feel So Fine’ which I imagine is as near as dammit to seeing the band encore in a club at that time. A studio album feels like second prize to the main event of witnessing the Black Country boys tear it up amidst a sea of sweat, denim and beer.

There are, however, some great songs on Slayed? – the boisterous, groovy opener ‘How D’You Ride’, the Motown meets psych rock of ‘I Won’t Let It ‘Appen Agen’, and the sardonic and downbeat ‘Look at Last Nite’, a song already forecasting the bands fall from the heady heights of fame. Then of course there’s the actual hit singles – ‘Mama Weer All Crazee Now’ and ‘Gudbuy T’Jane’. To these ears ‘Mama…’ is now rather stale and conjures grisly images of Oasis, but ‘Gudbuy…’ is still a corker, a sort of Status Quo meets The Rolling Stones in Wolverhampton Town Hall knees up, with Dave Hill providing some lovely Stonesy licks throughout.

‘Super Yob’ guitarist Dave Hill, (now the only remaining original member since the controversial dismissal of Don Powell) looms large in the legend of Slade, but what is surprising is how restrained his appearances are on this album. In fact on the opening numbers it’s Jim Lea’s bass that leads the songs and adds the heavy, thumping atmosphere to the darker, less glam numbers. Although Slade’s lyrics seldom match their knack for a tune, with the songs mostly being classic rock life on the road and woman-done-me-wrong laments, there are some subtler moments found in ‘Look at Last Nite’ and ‘Gudbuy Gudbuy’. It’s these, less familiar songs that will draw you in if you’re now immune to the big singles.

Ultimately though, these songs were written to be performed and enjoyed live and now that the classic line-up of the band’s heyday is an ever-fading memory, that’s what the purpose of Slayed? is – a chance to hear one of the UK’s greatest musical acts at the top of their game. Turn it up loud and Feel the Noize.