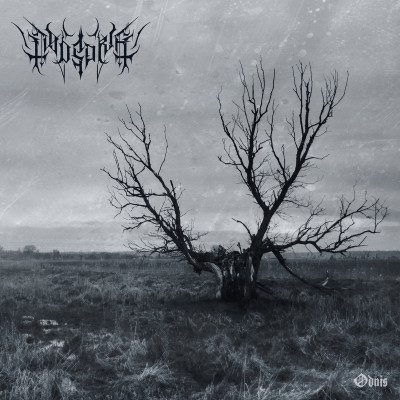 Anonymity in metal is becoming quite familiar nowadays. It has a certain draw to it that makes something that extra bit interesting, kind of akin to not wanting to see too much of Michael Myers’ face beneath the mask. It keeps the mystery there whilst you enjoy the killing, or in Dødsdrift‘s case, sublime black metal.

The German collective remain enigmatic and unknown, with a similar style to Portugal’s Gaerea. Comparisons will be made and they certainly have the same feel about their music but with not quite as much theatrics. Dødsdrift play traditional icy black metal infused with the contrasting harsh bleakness of isolation and the elation of catharsis. Sophomore album Ødnis comes two years after their successful debut Weltenzission and further explores the desolate depths of the human condition.

The minimalistic intro to ‘Fährde’ sets the scene nicely with haunting ambience before rising to bleak, frosty tremolos and blastbeats, a combination that Dødsdrift turn to in each track. ‘Schattenschafott’ features beaming tremolos soaring above precision blastbeats and swaying guitars with wintery, evocative imagery. A fleeting midpoint breakdown of jagged death metal sets an interesting contrast before returning to harsh, emotiveness and chills.

‘Ruß’ begins with echoes of post-black with its high-calling tremolos and carries gorgeous, emotive riffs through ever-present blastbeats. Shortest track ‘Laere’ begins with dissonant, atmospheric tremolos disappearing into a slow-paced, rhythmic groove through frosty desolation before delving into a cleansing bout of brutality as tremolos rise and fall through blastbeats. Excellent stuff.

The raw and chaotic ‘Moorbrand’ uses shrill, atonal riffs on the verge of lo-fi. A staggering blastbeat crescendo caps off the track, harmonising with shivering, sharp tremolos. ‘Enthauptet’ ends the album with its longest track allowing more expansive imagery to form and a fleshing out of its story. Its main body follows a very similar path to previous tracks and its closing half features some of the albums most beautiful moments. Euphonic.

With any album release you get a feel of themes from all that’s involved from lyrics and album art etc. Music can feel cold, feel bleak and feel cathartic. All these themes play a strong part on this release and in Dødsdrift’s music in general and you certainly feel the immersion. Riffs swell into a rhapsody of emotion, icy chills of bleakness washes over you and that pleasing shudder is the purging of all troubles to be carried away in the wind.

Ødnis sticks to its journey and rides it tremendously. Tracks are fairly short and stay in the 4 minute range. It’s an album that does just fine with the length of tracks it has but would benefit from less tracks at a longer length. The music is not too overly complicated as each track follows a similar structure, but remains as breathtaking with each spin. Ødnis is a triumph and Dødsdrift have once again stamped their mark on the genre.