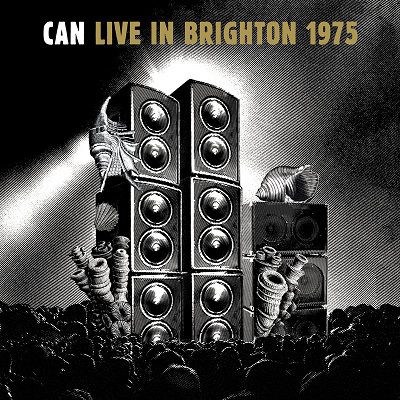 Continuing the curated series of live recordings from the masters of CAN, we go back into the time machine once more and travel to the year 1975 at the University of Sussex in Brighton on November 19th. It was the same year where the band released their sixth studio album, Landed on the Hörzu label and on Branson’s own Virgin Records during that time frame.

The Post-Suzuki period is perhaps one of their best period where they jammed and gave the College students at the University a big run of their money. Michael Karoli, Holger Czukay, Irmin Schmidt, and Jaki Liebezeit bring down the thunder at Brighton with these killer sounds that becomes a heart-pounding groove like no other.

After going through a Zeppelin-like groove on ‘Zwei’ and riding on the train with Jaki’s click-clacking ride into the unknown from the opening track of ‘Eins’ and sheer terror on ‘Drei’, you can hear audience’s requesting the band some of their favorite pieces that they want them to do. It becomes a jump scare thanks to Jaki’s eruptive drum work to get the crowd all riled up to hear more of the chaotic that’s to come on ‘Vier’.

It sounded almost like firecrackers going off unexpectedly as all hell has broken loose inside the university. The crescending madness brings to mind of a crossover between Tago Mago, Ege Bamyasi, and The Velvet Underground’s ‘European Son’. You feel the instruments clashing with one another as Irmin goes off the wall like a mad scientist on the keyboards before they go into this improvisational take on ‘Vernal Equinox’, similar to their TV performance on The Old Grey Whistle Test.

Let’s go back to ‘Zwei’. Since I’ve mentioned about Tago Mago, you can hear aspects of ‘Oh Yeah’ on the opening track. You can imagine a parallel universe where Damo didn’t leave the band and kept the machine going with his improvisational vocal lines by giving Karoli, Schmidt, and Liebezeit more ideas by keeping the beats up-and-running.

And then Mike does this bluesy sound for another return as he follow Holger’s bass lines on a loop as they head aboard another trains on ‘Fünf’. This is where more of the brutal attack textures comes to mind with Czukay’s bass sounding like a snarling monster as he, Karoli, and Jaki, are suddenly transformed into a three-headed beast, ready to attack a village with Irmin’s alarming synths on a loop.

There are aspects of Bach’s ‘Tocatta and Fugue in D minor’ in his organ work as I vision audiences are up on their feet giving CAN, a gigantic stamp of approval. Schmidt and Czukay trade blows with Jaki’s pounding bass drum and duking it out in a wrestling ring that has gone haywire and sending signals from the outskirts of space.

But Irmin lays down the law on his keyboards throughout ‘Sechs’. Karoli’s guitar chords go into a brief section of ‘Full Moon on the Highway’, but then Schmidt comes at the audience with a brief return to the early CAN albums. Michael suddenly comes in with this spiraling arrangement that makes the band even tighter than ever. It’s the climatic ending of ‘Sieben’ where the group honor their fellow comrades, Ash Ra Tempel.

Karoli goes at it by adding a huge amount of feedback and reverbs going in for another full-scale assault. He uses his guitar pedals by going in one corner to another, making sure that Manuel Gottsching is really pleased of where Michael is going in. The last six minutes of the piece becomes a ticking time-bomb waiting to explode.

The audiences on this recording, are hypnotized from what is going on before it ends with clapping and foot-stomping momentum for CAN to return to do another encore. Live in Brighton 1975 is a wow momentum. It’s another archival release that CAN has unleashed since the Stuttgart recording was unleashed back in May of this year.

I hope there will be more to come. Alongside the Stuttgart recordings, Live in Brighton 1975 is a knock-out punch. It is so hardcore, the roller-coaster ride has only just begun.