(((O))) Feature: Echoes of the Past: Mandoki Soulmates – Living in the Gap + Hungarian Pictures 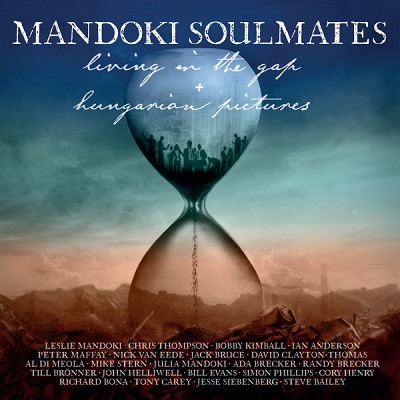 Leslie Mandoki is a name you probably won’t recognize. He is a German-Hungarian musician known for his work with the late ‘70s group Dschinghis Khan which were a Euro-Disco pop band launched in Munich. Then he continued as a solo artist, music producer and director in commercials. He worked with artists such as Engelbert Humperdinck, Lionel Richie, Phil Collins, and Jennifer Rush.

But for Leslie, he’s more than just a producer and helping with clients such as Audi and Disney. In 1992, he delved his toes in the water combining World Music, Jazz, and Progressive Rock rolled into one called, Mandoki Soulmates. From players ranging from Ian Anderson, Jack Bruce, Simon Phillips, Al Di Meola, and Chris Thompson of Manfred Mann’s Earth Band, this 2-CD set released from the Cleopatra Records label, are two studio albums entitled Living in the Gap and Hungarian Pictures.

According to the liner notes that’s on the album, the genesis behind the Soulmates was when Leslie was in the Refugee Camps as he entered Germany as an illegal immigrant. He was asked by the Resettlement Officers what his future plans were in Germany. He told them. “I came to play with my musical idols – Ian Anderson of Jethro Tull, Jack Bruce of Cream, and Al Di Meola.”

Even though he was imprisoned 17 times because of his political opposition, he fled into the West through a railroad tunnel in an action-film like scenario. Like something straight out of the 1963 classic The Great Escape starring Steve McQueen, it was a fight for freedom to avoid being prosecuted from the communist regime when he was a member of the student opposition in the summer of 1975.

Living in the Gap has this more relaxed side that Mandoki Soulmates brought to the table with a combination of Funk, Jazz, and Pop. Dealing with a chance to find peace and standing up against the troubling developments we are facing in, it can also be a challenging process that is very tricky at times.

The opening title-track has this Stevie Wonder-sque introduction. You gotta love that ‘Superstitious’ introduction as the lyrical textures with echoing chambers and filter bubbles that reflects the behaviors by treating their loved ones as if they’re nothing to us by talking on the phone during lunch and dinner for a night-out.

There is some crazy clavinet funk work with soaring midsections, followed by gospel-like choirs and Hammond Organ exercises, it has these complicated textures that Leslie channels the sounds of Gentle Giant. ‘Turn the Wind’ is Les’ autobiographical story with epic-like vocalizations. While it is a very touching story throughout the acoustic rocking background, ‘Young Rebels’ is a message to the next generation of young people fighting for peace.

It becomes a question of how they can fight if the past and present will haunt them for years to come. Sombering orientations, the Machine becomes this pummeling sound from the rhythm section. ‘Let the Music Show You the Way’ features a duet between Toto’s Bobby Kimball, David Clayton-Thomas, Ian Anderson and the late great Jack Bruce.It is a sing-along composition with dueling melodic structure between the vocals and Ian’s flute arrangements.

Built around the guitar styles of Extreme’s Nuno Bettencourt, ‘Too Much Pride’ gives us an invitation to be a part of Mandoki’s church that is jam-packed like no other.

Vibrations thumping throughout the horn section, Al’s crazy time signatures with Mike Stern and Helliwell’s sax getting people out of their seats in the hottest part of the day, are getting a chance to raise the roof. Listening to ‘Hottest Queen of Cool’ is Leslie going into a Broadway route, following Alice Cooper’s Welcome to My Nightmare’s ‘Some Folks’ with arrangements done by Hall & Oates.

I love that soulful organ touches that Cory Henry channels the Stax years from the late ‘60s and John’s smoothing improvisations vision the listener’s mind to see the woman of their dreams. ‘Wake Up’ sees Leslie’s daughter Julia take centre stage on her vocals.

And she can really sing. Till blares out these alarming sounds from his trumpet honoring Miles Davis as the John Lennon-sque lyrical textures in the style of ‘Cold Turkey’ and Hall & Oates’ ‘Kiss on my List’ goes into funky town from this Tower of Power horn arrangements.

The first two minutes of ‘I’m Not Your Enemy’ gives Cory the mighty hammer to lay down some brutal organ work, channeling the late great Keith Emerson and the Canterbury touches from Egg’s Dave Stewart. He then goes for a ramming speed with a little help from Mike Stern’s architecture in the styles of latter Pink Floyd.

Julia details the craziness that’s going on the outside world that is about to become a thunderous nightmare as Leslie gives Ian a helping hand to return of the Folk-Rock trilogy of Jethro Tull with a strong message of peace throughout ‘Mother Europe’. While Ian is singing, you can feel Jack’s spirit throughout the song as if he’s watching Les give Bruce’s circle coming in full.

The second disc Hungarian Pictures, is a conceptual piece showcasing Mandoki’s proggier approach. Inspired by the musical virtues of Bela Bartok that Leslie had a conversation with Deep Purple’s Jon Lord and King Crimson’s Greg Lake, he wanted to vision Bartok’s representation of great richness, showing the commonalities and harmonies.

‘Barbaro’ has these Uriah Heep vibes as Helliwell and Henry go for the jugular to climb the Mountain that are as far as the eye can see. With it’s climatic battle between ELP’s ‘The Barbarian’ and The Nice’s ‘Rondo’, you got to love the intensive piano work that is on here.

‘Transylvanian Dances’ is a 19-minute suite that sees Mandoki Soulmates going into the Power Metal approach in the last half of the piece. Edvin channeling his violin by crossing over from Roxy Music’s Eddie Jobson and the Mahavishnu Orchestra’s Jerry Goodman, it is a calm after the storm with this piano ballad on the empty sidewalks from the gigantic party that happened last night.

As the mournful organ work channels Hansson & Karlsson, the Danny Elfman-sque intro gives band members a chance to walk into this intense Romanian dance tribe Leslie gives them orders for the direction that they’re about to go in. Not only have that, but its Al Di Meola that comes center staged channeling more of the flamenco challenges.

From it’s fingerpicking techniques of Ottmar Liebert, Mason Williams, and the late Michael Hedges, he is completely on fire during those sequences that makes it an epic momentum. Sung in the style of King Crimson’s ‘Epitaph’ ‘You’ll Find Me In Your Mirror’ is Leslie walking into the lyrical territory of Pete Sinfield.

Fausto’s accordion cries out in the story on survival and making the escape to be free from the chaos that Leslie had to endure as he sails back home many years later with a ‘Return to Budapest’. I can imagine the emotions run deep for him as Julia and Richard lend Leslie a chance to go into this spiritual meditation to move forward.

This was something that wasn’t on my radar at first. When I first heard it for the first time last year, I nearly wanted to sell it for something else. But then this year, I went ahead and listened to the album all the way from start to finish. It was sort of like what I went through from ELO’s Out of the Blue, Captain Beefheart’s Trout Mask Replica, and Magma’s Mekanïk Destruktïẁ Kommandöh where I didn’t like it the first time, but it grew on me more and more.

Mandoki Soulmates’ music may not be everyone’s cup of tea per se, but this double album is quite an adventure to bring it all to a happy ending. And as we are about to endure a brand new visual take of Hungarian Pictures that is about to come out from the InsideOut label this year entitled Utopia for Results this September, who knows what to expect from Leslie Mandoki.