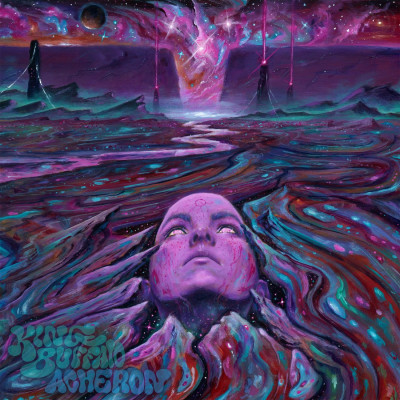 Better people than any of us have talked about how it’s the journey, and not the destination, that matters and that holds true for any good album. Music isn’t about some cataclysmic eruption or sonic epiphany (at least not always) but instead it should be something that transports the listener to another time, place, or state of being. In the case of Acheron, that place is the River of Woe that grants travellers entry into Hades, the underworld of Greek mythology, and if that doesn’t sound like a trip you want to take, this album will make you rethink your priorities.

Recorded in Howe Caverns, NY (which naturally has its own subterranean river snaking its way through), opener ‘Acheron’ eases the listener in with the sound of that very trickling water, clearing a path for the band to follow. Clocking in at ten minutes, as with the rest of the album’s cuts, it seems like it should be massive but instead relies on subtlety to make an impression. The melodies are gradual and insistent, not the kind to aggressively stick in the head but rather the ones that eclipse the outside world while they’re in motion, and the steady motorik rhythms always pull back at the right moment, the explosions of distortion brief yet occasionally obtrusive. At their worst, they interrupt the mesmeric flow that ‘Acheron’ excels at but used correctly, as in the song’s latter half, they provide welcome bursts of energy and colour.

Naturally, there’s a rather watery theme to the record that is evident in the gradual ebb and flow of its rhythms, yet ‘Zephyr’ has a quality that is aptly airy. Sean McVay’s vocals float freely across riffs that swirl and sway like smoke, and rather than waves of distortion crashing across its gentle melodies, there’s more of a sense of propulsion, the guitars a wall of sound that propels the listener deeper into the world they’re creating. Much as with McVay’s guitar work, Scott Donaldson’s drumming works well as it never dares to be too showy. It’s not basic by any stretch but there’s a dedication to groove and atmosphere that’s commendable when so many similar acts give in to extravagance.

‘Shadows’ almost serves as a callback to The Burden Of Restlessness by echoing the same darkness of tone and willingness to experiment in terms of accompaniment. Both McVay and Donaldson hold back, letting Dan Reynolds’ spry bass lines take the reins, and the caverns themselves act as a silent partner, their echoes and openness giving the sound a resonance that would have been impossible to mimic. Flourishes of synth make a prominent return, all noble melody and grandeur, and when they dip out into an explosion of psych-rock bombast, it’s handled with a flair that is so effortless and so very them.

If the rest of Acheron was about that journey deeper into the darkness of the underworld, final cut ‘Cerberus’ exists as nothing but the journey. It’s a song that never feels like it has anywhere to go but is content to exist as a series of moments – of tension and release, of violence and respite, and of sound and silence. Though it has one of the most laid-back vibes on offer, it ends up as one of the most resolutely metal songs the band have ever laid down.

As their second record of 2021, it maybe felt like King Buffalo would have played it safe and stuck to familiar terrain, and in a sense they have. It doesn’t have the same impetuousness as its predecessor but by opting for longer, more atmospheric cuts they have played to their strengths and delivered yet another instant classic, one that’ll sit proudly on many end-of-year lists and that promises a follow-up that fans already know will be spectacular.