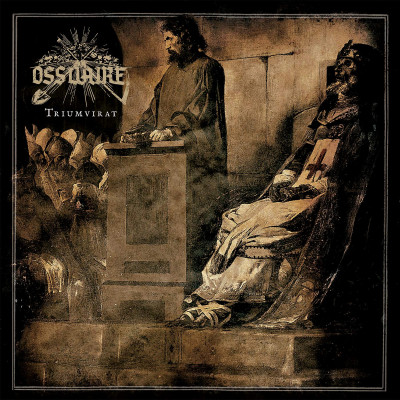 Great new record Triumvirat by Québec’s Ossuaire: fast, aggressive, but with the backdrop of harmonic grandeur you can generally expect in black metal from that province.

The first track is a minute and a half of synthesized grime, but more interesting than most ambient intros in the genre, here a dirty swirl of cold wind exhaled from the dark tunnel entrance yawning in front of you. Then we have ‘Sainte Purge’, a solid slab of dense black metal. Energetic, almost rockish flourishes complementing rather than distracting from the driving force of the piece, and the audible, frenetic bass sort of zings along underneath making things seem even more wired.

A powerful aspect of black metal for me is the hints of melancholy, earnest melodies even amid excessive bludgeoning distortion, breakneck blastbeats, and abject howling- the very subtle shades of charcoal and grey in a painting that at first looks just totally black. ‘Triumvirat’ is a good example of that faint nostalgic mood coming through, a bit more obviously in the occasional downcast choral-effect chorus bits, but more powerfully somewhere around the main riff, perhaps in its stepping descent section, as well as in some more difficult-to-pin-down aura. ‘Ignipotentis’ amps up both the fury and the atmospherics in its 9-minute span, starting out already epic and just rocketing off from there, with tinkling acoustic guitar leading the track in and then returning to ornament some of the building passages later.

Finally, ‘Cénotaphe’ is a great 6/8 victory lap that extends the same swirling swelling atmospherics… the stirring spoken voice parts put me off only slightly, and the rest of the hoarse shouted vocals across the record fit the mood far better. The sweeping organ at the end of the track which join the metal instrumentation and then outlast it, made it ever so slightly over-triumphant sounding for my tastes. But it’s a touch of colour that doesn’t take away from the fact that this is an excellent contribution to the region’s reputation for setting the black metal bar incredibly high.