(((O))) Review: Landstrykar – A Walk Amidst The Cairns 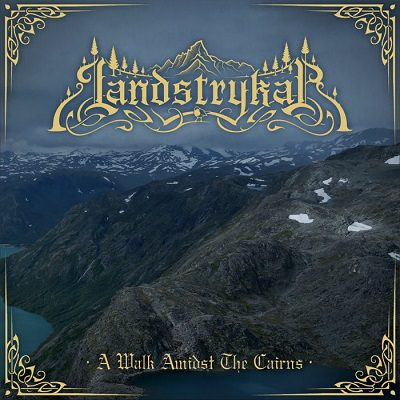 A Walk Amidst The Cairns by Landstrykar

Okay, how do I describe this? A knight who is on this spiritual journey to find himself. It’s quite a task that the young hero has taken by meeting these strange people and embarking on a challenge that is bigger than he’s envisioned. And with incredible medieval-like synth music from the realms of Landstrykar, its quite the adventure that awaits us.

The project was formed last year by Andre Kramer during the beginning of that year in 2020 in the Netherlands who wanted to combine the passion between film, northern nature, video game soundtracks, and influences raging from Summoning, Vinterriket, Ildjarn (Hardangerviddo), and Jim Kirkwood.

What Kramer has done with A Walk Amidst The Cairns is walking towards a mysterious admiration over the landscapes of nature that is brought to life. I wouldn’t compare to “dungeon-synth” music, but more like a walk through the various locations inside the kingdom, knowing that the struggles they have to endure.

There are some stronger elements between Philip Glass, The Enid’s first two albums, Hans Zimmer, Rick Wakeman, and John Williams. He takes listeners into these deep, dark cavernous locations filled with magic and mysticism that we haven’t seen before. I can imagine the album being used as an alternate score for Jim Henson’s 1982 cult classic, The Dark Crystal.

Believe me, I can really imagine this being played in full throughout the whole movie. You can feel the passion, beauty, and emotion that Jen fulfilling his prophecy to heal the Crystal by retrieving the shard from Aughra. It’s quite a visual story Landstrykar has released this year.

It isn’t just an epic instrumental album, but an imaginative visual movie brought to life with a killer score that awaits us. It’s always great to hear something powerful when you listen to A Walk Amidst The Cairns. While it sounds like a title that either Tolkien, C.S. Lawrence, or Brian Froud could have used, it would really get fantasy readers a lot of attention to hear an amazing title like that.

So if you plan to plop down in your bean bag chair, sitting next to the fire whilst reading stories from epic books you haven’t read for a long, long time, then Landstrykar’s A Walk Amidst The Cairns is the perfect choice of music you might want to put on from beginning, middle, and end.