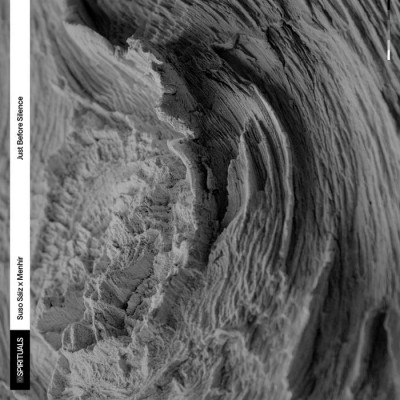 Spanish composer Suso Sáiz has been coming up with some exquisite ambient music and film soundtracks for years now, and has acquired a solid supporter base. On the other hand, Madrid duo Menhir (Iván Cebrián and Coco Moya), may not be so well renowned, but share mutual respect and musical ideas with Sáiz.

It is no wonder then that they decided to transform that mutual respect into a very concrete collaboration, coming up with the aptly titled Just Before Silence.

What started out as an improvised studio session, turned out into an album based on instinctive mutual guidance and playing, as if they were in a state of collective meditation.

Coco Moya notes a realisation that dawned on the group during the process: “a tendency to silence. A way to approach sound making. A way to approach a sound encounter without words or concepts, just by letting the musical perceptions and emotions coexist and connect.”

In lesser hands, and with a lesser level of mutual understanding, such a project could turn into a complete disaster, music meandering nowhere and everywhere.

Yet Just Before Silence works because the three musicians involved obviously know the importance of silence in music and even more so, the exact moment when notes transition into silence and back.

To be able to do that in any shape and form and make it sound intriguing, you not only have to have expansive musical knowledge, but also have the intuitive sense of when that transition moment takes place, something that is excruciatingly hard for one musician, let alone three.

In the end, what Suso Sáiz and Menhir were able to come up on Just Before Silence is some brilliant, intuitive meditative music.