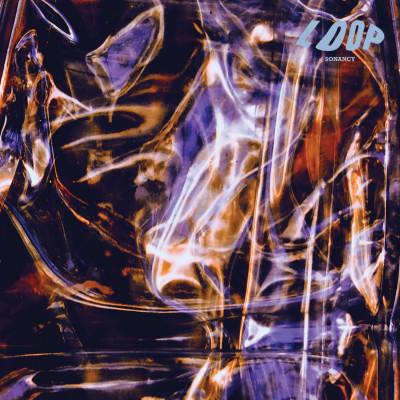 Expectations are a problem, and 32 years is a long time. Loop were always a bit of a problem but the three decades since their last album has mostly burnished their reputation and answered some questions around what they were doing back then and what they might do now. Helpfully, Sonancy means to make noise. Which they do. Cutting to the chase then, is it like Fade Out? No, not really. Is it a startling new direction? No, it’s definitely Loop. Is it any good though? Yes. Yes it is.

I think I listened to it too quietly first time because I wasn’t immediately convinced. Probably had a few of those expectations I needed to drop as well. Reassuringly main man Robert Hampson is not inclined to try and recapture old glories in diluted form but still has a good grasp on what makes Loop, Loop. Taking those elements forwards, Sonancy has a different sheen to it. It’s less dirty, less Stooges. It also lacks the expansive open horizons of earlier records. Hampson making a deliberate decision to keep the tracks short and impactful, a choice that is not necessarily his friend. They can seem to fade out early or end just at the point of take off. An adjustment I needed to make to my expectations, the effect lessens as Sonancy asserts its own identity.

The pair of tunes that have trailed the release are the most classic sounding. ‘Fermion’ is an absolute rager, putting a smile on your face with a charming filter sweep and a perfectly Loop lyric “which way to go, the ebb, the flow…” Elsewhere they push the sound about in different directions so that when ‘Halo’ arrives at the record’s mid-point its bursts of urgent charging guitar feel like a reassertion of the band’s identity. Particularly coming off the back of ‘Isochrone’, six minutes of pattering rhythms, echoing chords and a phased softly spoken vocal that marks the most they’ve ever sounded like Spacemen 3. A tired and mostly unhelpful comparison, I really wasn’t expecting that, but there it is.

Watching them live when they first got back together I was struck by how many of the bands who had come along since, owing them at least a small debt, had pushed further away from song forms abandoning lyrics altogether. It seemed natural that Loop might have gone that way had they stuck around. Of course Hampson’s next project, Main, let go not just of songs and lyrics but percussion and, steadily, the guitar as well. Sonancy returns to fairly tight strong structures, lyrics, and the guitar in a carefully judged way. Mindful of reactivating his psych-rock band in a world of over abundance Hampson achieves a sound here that puts notable distance between himself and all that black-tar sub Hawkwind sludge. It’s a rounded, bizarrely ‘clean’ distortion which all but erases the idea of anyone physically playing it for free floating blocks of sound that drift across one another. Pitched at a point where it’s still recognisably guitar, his own identity is stamped into it through his familiar rhythmic cadence more than anything else.

Comeback albums are a problem, always in the shadow of their older more beloved siblings. It doesn’t have Fade Out‘s dark edge of menace or the hypnotic power of A Gilded Eternity, but on Sonancy Loop pull off the tricky balance between maintaining the band’s core sound and moving it forwards. I still haven’t quite fallen in love with it but I can’t deny, I’m very impressed.