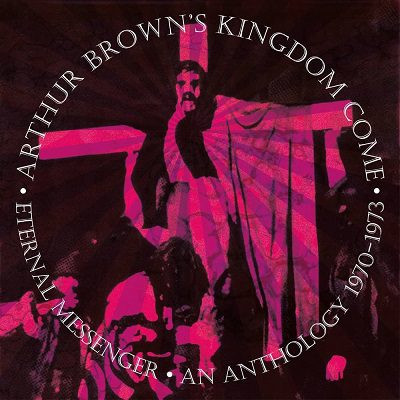 Kingdom Come were a band that were never going to be as massive as Genesis, Yes, and ELP. They had more of an experimental approach, theatrical boundaries, and psychedelic intensity that was way out there. Fronted by the legendary Arthur Brown, the band launched back in 1970 after the demise of The Crazy World of Arthur Brown the previous year in 1969.

Despite poor record sales, a hit in the underground UK festivals, dividing line in the sands from music critics, it’s time to give this band the recognition they deserve. This 5-CD set from Esoteric Recordings consists the first three studio albums originally released on the Polydor label along with two unearthed material covering their first jamming sessions 52 years ago originally on the Voiceprint label in 1995, and the BBC sessions they did from 1971 to 1972.

I first became aware of Arthur Brown’s Kingdom Come many years ago in issue 97 from Classic Rock Magazine on September 2006 when they covered the secret history of prog. It was in an article which contained the 20 Maddest Prog Albums which were picked by Geoff Barton, Jerry Ewing, Paul Henderson, and the late, great Malcolm Dome.

From albums such as; Magma’s Mëkanïk Dëstruktïẁ Kömmandöh, Egg’s The Polite Force, VDGG’s Pawn Hearts, Rick Wakeman’s Journey to the Centre of the Earth, Jon Anderson’s Olias of Sunhillow, and Yes’ Tales from Topographic Oceans. Some of the bands and artists were taking risks by taking the genre as far as it can go. Except for ELP’s Love Beach, don’t ever ask me how it was. Please. I’m off-topic, but one of the bands that caught my eye was Arthur Brown’s Kingdom Come’s 1971 debut, Galactic Zoo Dossier.

And that was where I took my scuba gear and dived into Arthur’s ocean. And it’s a sea filled with massive, insane beauty like you’ve never heard it before. From the crazy sermon introduction before taking this massive jump to light-speed on ‘Internal Messenger’, you get this train-speeding vibe between organ, guitar, and bass taking the jugular with Brown’s vocals in its rebellious form.

You can tell that Arthur is going for the jugular with some chaotic attack with massive ray guns screaming like a mad man from his Crazy World years, knowing that he has that spirit inside from the psychedelic period of the late ‘60s. The hay-wiring tape destruction on ‘Metal Monster’ with its swirling synthesisers going bat-shit nuts as Brown’s vocals goes into a Dalek approach while the calm after the storm approaches between ‘Simple Man’ and ‘Sunrise’.

But he returns to the beat poetry in this apocalyptic nightmare of ‘Creep’ as the engines rev up some more for some alarming signals on the organ climbing up the ladder for this heavy massive attack on the ‘Gypsy Escape’. There’s some strong elements between Thick as a Brick-era from Jethro Tull and Rush’s Fly By Night, channeling ‘By-Tor and the Snow Dog’ that is out of this world.

Unexpected changes, but way out there, Kingdom Come really get down to business to make the flight trip home towards the band’s second sole self-titled release released 50 years ago. The band’s second album is a cross between The United States of America’s sole self-titled release in 1968, Captain Beefheart’s Trout Mask Replica and Faust’s The Faust Tapes rolled into one.

Yes it’s topsy-turvy, but a staggering adventure from beginning to end. The musique-concrete opener turned militant watery Beatlesque approach opener on ‘Water’, Brown’s romantic side with Phil Shutt’s punching bass lines and jazz closer piano for the ‘Love Is a Spirit That Will Never Die’ before going into an operatic twist on the ‘City Melody’.

This is where it gets really strange. Here the band go into this massive organ and bass groove that has some Egg-like form between Phil and Goodge Harris channeling both Mont Campbell and Mike Ratledge from the Soft Machine whilst going for the obscure masters, Marsupilami that comes to mind. And then, everything goes into this maddening world with police sirens going crazy, spoken dialog, and people going to work with Brown chanting ‘Joy’ as if he’s witnessing the end of the world.

You can hear the mellotron on the finale of ‘God Save the Queen’ in its true symphonic form while laying down those funky scats of the ‘Traffic Light Song’. Its Monty Python meets Herbie Hancock’s Headhunters-era like no other! Believe me, Kingdom Come have enough dynamite to go through those insane routes by making you shit your pants forever and ever including the maddening keyboards for ‘The Experiment’ to begin!

There’s a nod to the ‘40s big-band swing in the last three minute section. Now I believe it’s this maddening organ and drum exercise with chaotic Moog synths going off the wall that honours bits of Egg and Hatfield and the North’s keyboardist Dave Stewart from The Polite Force-era. You can tell that Brown knows his inspirations very well before channeling a pre-hip-hop poetry styles of The Last Poets with some brutal sequences.

Now onto the band’s third and final album, Journey released in 1973. With American Victor Peraino replacing Michael “Goodge” Harris during production, this was the band’s step into the experimental sound. It sounds like it could have been recorded during the post-punk and new wave-era from the late ‘70s, early ‘80s and would have gotten the punks interested to see what Arthur Brown was doing.

With the usage of the Bentley Rhythm Ace drum machine, Kingdom Come delve into the waters of the krautrock movement. From the thumping nightmarish space voyages of ‘Time Captives’ and heavier attitudes of ‘Gypsy’, to the cavernous wonders on ‘Triangles’, and the mellotronic fanfare turned Peter Hammill lyrical structures sung by Andy Dalby I believe for the ‘Superficial Roadblocks’.

I can imagine Hammill listened to this album during the recording sessions for his third studio release The Silent Corner and the Empty Stage for the opening song ‘Modern’ for inspiration. The fourth track is like an operatic sci-fi movie sung throughout its entirety, but Andy goes for the jugular to set up the nightmares that is upon us. Shutt takes us on the planet home to a killer bass riff loop on ‘Come Alive’ as Brown follows his melodic lines with the drum machine going in for some brutal attacks to make a soft landing.

The fourth and fifth disc are quite a gem. Let’s get to the Jam sessions recorded in 1970. The first sessions are just a mind-boggling rehearsal to see where the direction Arthur wanted to go into and proved his followers and listeners know that he’s more than just the God of hellfire.

You can vision a dark, insane maddening effect that Brown and his members take the temperature levels up a notch with a cross-over of jazz, soul, beat poetry, story-telling madness, Keith Tippett-sque arrangements, elements of Crimson’s THRAK opening of ‘VROOM’ from the mellotron, Blaxploitation film score, and beginnings of the debut album.

It may not be for the faint of heart, but Kingdom Come goes for that jugular including the BBC Sessions they did for Brian Matthew, Mike Harding, Alan Black, and John Peel. The gospel mournful beauty for the ‘Sunrise’ and the advice for listeners with a sun-lighting approach for the ‘Spirit of Joy’ to appear whilst Harris goes in for the kill between ‘No Time’, the turmoil meeting the ‘Simple Man’, more craziness to happen on ‘Space Plucks / Creation’.

The booklet contains an interview with Arthur Brown done by Malcolm for the box set which includes photos of the band’s performances, festival posters, 45 RPMs, and the crazy costumes they would wear, including Arthur inside a syringe during one of the shows! I’m not kidding, this is one hell of a set to really get you up-and-running if you’re ready to be a part of this crazy challenge that Brown has unleashed.

While the band had called it a day, they were so far ahead of their time making this insane music that was too out there. But this incredible box set is worth the exploration to see why people like Bruce Dickinson of Iron Maiden, Pete Shelley of The Buzzcocks and Parliament Funkaldelic’s George Clinton were admirers of Brown’s music.

So if you interested to be a part of the Eternal Messenger’s rocket ship, be prepared to explore the sound, vision, and out of this world craziness from Arthur Brown’s Kingdom Come.