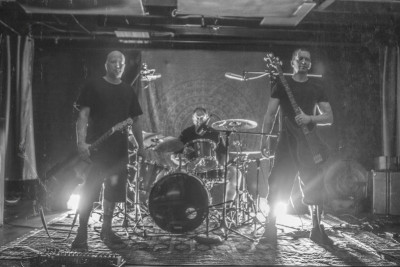 I composed primarily on piano through age 18. But I was a singer in a punk band starting at age 16 and I think I eventually wanted to learn guitar as another tool for composition and also an additional way to contribute to being in a band.

The initial idea behind prog-rock lies in the word progressive – including elements within the music that supposedly don’t belong there. Of course, sometimes things turn into pre-built formulas and strict rules, at least in the mind of some artists. Those always tend to bring a bad name to a certain genre or style.

New artists to a genre often tend to repeat those formulas, possibly because they are new and want a firm footing, or they simply don’t know better. Prog-rock is no exception to that rule. Actually, it is often overflowed with artists that repeat those mistakes.

Those that do try to break down the formulas and bring in something new and fresh, or integrate a style or genre that supposedly doesn’t belong within prog do crop up and help push the genre forward.

One such artist is West Virginia acoustic guitarist Spencer Elliott, whose latest (fourth) album SE3 brings exactly that breath of fresh air prog-rock needs these days. From Elliott’s approach to acoustic guitar to his inclusion of funk, metal, and all things experimental into his music break the usual prog-rock formulas and recipes and initiate new possibilities.

Ljubinko Zivkovic talked with Elliott about his beginnings, his approach, and other things relevant to his music:

E&D: Acoustic guitar and finger-picking playing style seem to be your musical base. Yet, your bio says you started out playing and composing on piano. When did that switch occur, and what inspired you to do so?

Spencer: I composed primarily on piano through age 18. But I was a singer in a punk band starting at age 16, and I think I eventually wanted to learn guitar as another tool for composition and also an additional way to contribute to being in a band.

E&D: Your latest album ‘SE3’ covers quite a wide musical ground from prog rock to funk and metal and a few other things  in between. What would you say were your main musical influences?

Spencer: I think my compositions draw from a wide array of influences.  I have always loved the piano compositions of George Winston.  I am also inspired by the music Jimmy Page crafted through melodic lines and grooves in Led Zeppelin as opposed to chord progressions.  I also love Rush’s use of syncopation and how all instruments serve the dynamics and accents of a piece of music. I have always been fascinated by the dark melodies Robert Smith created through the Cure.  And I appreciate the irreverent spirit, intensity, and musicality of punk and post-punk bands like Bad Brains, Jane’s Addiction and Mars Volta.

E&D: Since acoustic guitar is the key to your music, who would you say were the most influential guitarists in developing your style?

Spencer: When I took a deep dive into modern finger style guitar in 2007, I spent a lot of time listening to Michael Hedges and Don Ross.  I learned a lot of my technique from studying compositions by Andy McKee and Antoine Dufour.

E&D: How does ‘SE3’ differ from your previous three albums?

Spencer: My prior albums were all solo guitar. SE3 contains 8 pieces that were previously released on solo acoustic albums, as well as two new compositions that have never been released.  They are all transformed into larger and more dynamic compositions with the addition of bass and drum parts by bassist Sean Sydnor and drummer Chris Hudson.

E&D: There is a skillful combination of melodic and rhythmic elements in your music, how do you find the balance between the two?

Spencer: It’s probably accidental. But I do like the contrast. So if a piece is dark, I will often add some light.

E&D: What would you say would be a natural music progression for you from here, and what are your upcoming plans?

Spencer: The SE3 project is already working on new material.  So I would like to think there will be a follow-up album in this format.  I have some compositions that are perhaps more contemplative that likely would not translate as well in the prog-rock SE3 format.  I have considered working on string arrangements for some of those pieces with cello, violin, and viola.  But I have enough on my plate at the moment.