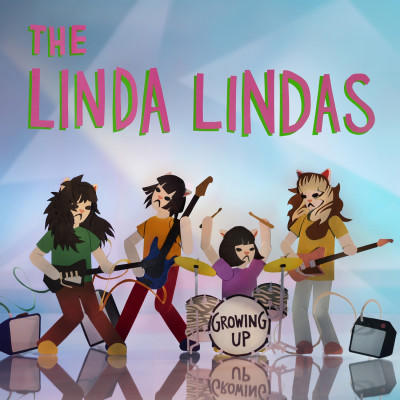 Growing Up by The Linda Lindas

Teenage, L.A. punks The Linda Lindas deliver a short and sweet blast of sunshine and tunes on their debut album Growing Up. It’s fun. It’s a great summer record. It’ll make you dance around the room and sing along. It’s going to rub the worst music bore dullards up the wrong way. I expect it’s a fine soundtrack to driving down an open freeway, less so a congested ring-road while worrying about soaring fuel prices but do your best. Once upon a time west coast rock ‘n’ roll used to peddle a myth of endless summer, of teenagers “out there having fun, in the warm California sun.” The Linda Lindas aren’t so carefree or oblivious but their youthful energy and golden state glow is infectious.

The band’s story so far has been, quite literally, Hollywood. The terminally jaded will point to this as reason for suspicion. Ignore those people, life’s bleak enough already. All bands need a little luck to get anywhere. They were doing something well enough to land a Bikini Kill support slot, which is where Amy Poehlor spotted them, realising they’d be perfect for the band in her high school, riot grrl pic Moxie! helpfully pushing them in front of their ideal audience. I expect you’ve either seen it or it’s really not aimed at you but it’s pretty good and when The Linda Lindas appear it’s legitimately exciting in a way gig scenes in films so rarely are. They knock out fizzing covers of Bikini Kill’s ‘Rebel Girl’ and The Muffs’ ‘Big Mouth’. It wouldn’t have been a problem to stir a cover or two into the mix here but they smartly stick to their own material.

Their sound is bright and excitable power-pop punk, charging forwards with melodies and arrangements that somehow both channel and belie their youth, (drummer Mila, the youngest, is just 11). On the cover they appear as cartoon cats, inviting Josie and The Pussycats comparisons and then dancing away from them with songs that are more than two dimensional. There’s a one about a cat of course, ‘Nino’ “killer of mice and rats” which has a dash of that Shonen Knife childlike wonder about it but the other songs have a bunch of regular teen-angst and confusion. ‘Magic’ has a wonderful chorus that catches the dawning dread of stepping into adulthood “What if magic revealed, something nobody would ever, wish upon themselves or anybody else. Maybe reality is better?”

As for the shabby state of reality, their performance of ‘Racist, Sexist Boy’ in LA public library caused a bit of a viral ripple last year. The girls in the band are half Asian, half Latinx and the song directly addresses their everyday experience of that against their angriest, rawest, tune. Inspiring to see something that bold and honest but an odd choice to end the album on. With the media attention they’ve already attracted they’re stepping out into a pretty harsh light here but ‘Growing Up’ is a good record, varied and accomplished. There’s hope for their future. And that’s a pretty rare feeling these days.