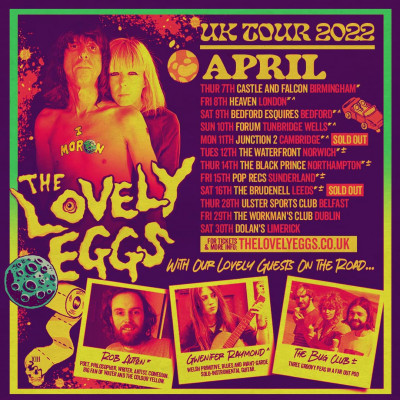 The Lovely Eggs at Castle and Falcon

The Lovely Eggs hit the stage with little fanfare, blasting straight through four tunes from their last album I Am Moron before stopping for breath. It’s been two years since the album came out. Two long years that this show has been kicked down the road and rescheduled. Back then we thought covid would just be a few months, tops, I thought everyone would get to know the songs and when the tour happened it’d be great, but gigs have been back a while now and the initial response from the crowd is slightly stunned and inert. As part of integrating their widening sound-world Holly’s voice has a weird slightly too heavy effect on it. It later emerges this is the result of teething problems with a new pedal David has made for her that looks on when it’s off and vice-versa.

They say their hellos and play ‘Magic Onion’, the room relaxes a bit more and everyone starts to get into it. For ‘You’ve Got The Ball’ Holly kicks a football out to bounce around the crowd which goes off with good humour despite the low ceiling. ‘Long Stem Carnations’ loses it’s long outro running straight into a killer ‘Wiggy Giggy’. By now band and crowd are all enjoying each other’s company. Holly takes a moment to reflect that “we’re getting more and more lasses down the front these days… I love it” and then suggests we all move around like a sushi bar so everyone gets to come down the front for a bit. They play ‘Fuck It’ and we get on board, shuffling around across the front of the stage and back to roughly where we started, joining in for a jolly sing-a-long to the chorus. It’s a credit to their charm and the character of their audience that this works although it’s unlikely to become a feature of the tour as afterwards they realise, “it’s like a funeral and we’re the corpse”. 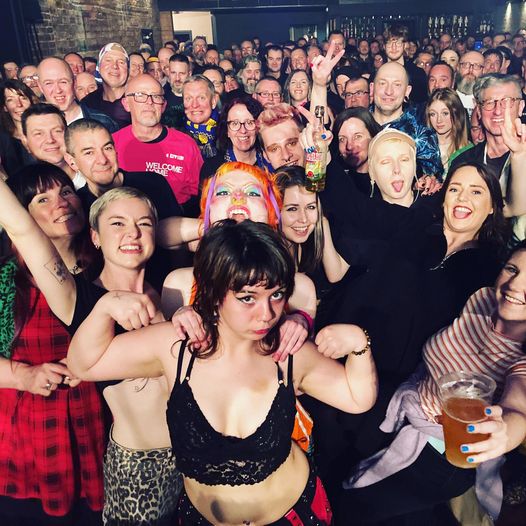 Far from being a funeral it’s now a proper party, and they bash through a great ‘You Can Go Now’ and into the final stretch. The majority of the set comes from the last couple of albums and the toughening of their sound experienced there gets pushed a little further live; Holly’s guitar at times is a surprisingly thick, deep roar. In the old-classic-near-the-end spot tonight we get a joyously scrappy romp through ‘Food’. “I wanna masticate with you, I wanna watch while you chew” still a hilarious opening line but it harks back to an earlier version of the band who are steadily moving away from their quirkier moments into something a little darker and angrier. Closing the show this evening by hammering through a couple of This Is Eggland tunes ‘I’m With You’ and a particularly fierce ‘Return of Witchcraft’ and they’re gone. There’s no new material in the set tonight and no mention of it either, but they’ve had a couple of years kicking their heels so I don’t think it’ll be long before they’re back. Looking forward to it.