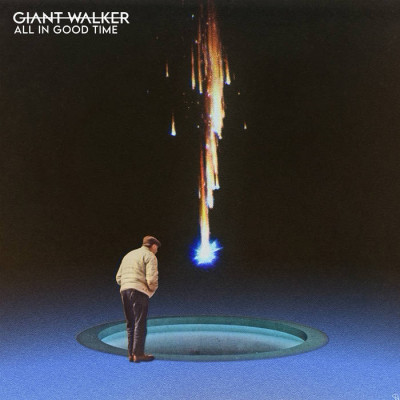 All In Good Time by Giant Walker

The band formerly known as Xero took full advantage of the Covid pandemic lockdowns by not only changing their name to the far better Giant Walker, but also found themselves making music through file sharing and, like many having of us, having to arrange Zoom meetings for communication. This in turn led to a reverse order of the pre-Covid way of doing things in the more traditional metal way – road testing songs live first before releasing them as a debut album.

Childhood friends Steff Fish (vocals) and Jamir Southern (guitar) with bassist Jordan Gregory and drummer Alex Black united by their love of Soundgarden, Radiohead, Karnivool, and Deftones, arrived at an album’s worth of material. As life started to get back to some-kind of (new?) normal they packed their bags and travelled to producer Chris Coulter’s Southampton Ranch studios to lay down work on their creative endeavours. This led the way to the recording of All In Good Time at London’s Stakeout studios with Chris as producer.

Very much combining their afore-mentioned musical heroes into Giant Walker’s sound does make the band’s sound harder to pin down, but this does notch up their levels of intrigue. Maybe that’s why they’ve been labelled as progressive metal, but I would say that this is slightly misguided and almost put this writer off giving them a listen. I’m glad I did get to hear a couple of their lead off songs prior to their debut’s release. Unlike Iron Maiden’s latter day evolvement into largely lengthy Irons style prog metal – is it only me who misses their mixing it up with swashbuckling metal belters? – Giant Walker’s All In Good Time instead is packed full of (mainly) concise four minutes-ish nuanced song-writing, unpredictable time signatures, spacey drifts, some damn fine crunchy sharp riffage, and an even sharper production, and to add the sprinkles on the baked delight is a stand-back impressive lead tonsil delivery.

While the album cover art smacks of all things sci-fi (and totally beyond this reviewer’s understanding – over to you, sci-fi fans), lyrically the band are far more grounded with thoughtfully cathartic reflections on loneliness and disconnection. There is a rewarding simplicity to the lyrics – and I mean this in only positive terms – as to the chorus of the excellent ‘Katoomba’, whereby Steff’s soaring ‘I won’t lose my head’ is a reminder of how we all had to dig deep emotionally. This isn’t to say All In Good Time is a pandemic themed album only. Lest we forget, feelings of loneliness and isolation can be felt at any time and will always be a feature, at some stage, during one’s lifetime.

There is a super strong confidence displayed in the writing, whole band performances, and with the production. Each song is packed with variety and on many occasions’ end in very different places to where they started. Take the punchy opening on ‘Podha’, leads to a glacial soundscape finish. While ‘All We Have Is Gone’ near ballad beginnings proceeds to a monstrous riff with Steff’s throaty ‘n’ gutsy vocals adding extra power. While there are songs that stick in the mind more than others, the songs never overstay their welcome. This is still an album to be enjoyed for maximum pleasure in its entirety.

“I’m a river run dry” croons Steff – not creatively, because Giant Walker have made an impressive debut.